Researchers off the coast of Vancouver Island were stunned when a two-metre long shark slammed itself into a barnacle-covered log – behaviour they say has never been captured on camera before.

The Fisheries and Oceans Canada crew was exploring Canada's largest underwater volcano as part of an expedition with Ocean Networks Canada and Nuu-chah-nulth Nation when it happened.

The two-metre male salmon shark caught the crew's attention when it started brushing itself on the log repeatedly.

"It looked like it was aiming for these big clumps of barnacles and then it would heave its body out of the water and actually slide it along," said DFO marine ecologist Cherisse Du Preez.

They believe the shark was attempting to rid itself of parasites attached to some of its fins.

"It's really interesting that these logs out at sea may be scratching posts for them to rid themselves of parasites," said Du Preez, adding the shark didn't appear to be bothered by the crew floating nearby.

"As far as I know, this footage doesn't exist elsewhere," she said.

The expedition team will last two weeks and will see the crew livestream footage of the Explorer Seamount, which at over 2,000-square-kilometres is Canada's largest underwater volcano.

The livestream can be watched on the DFO's Pacific Seamounts 2019 Expedition site. 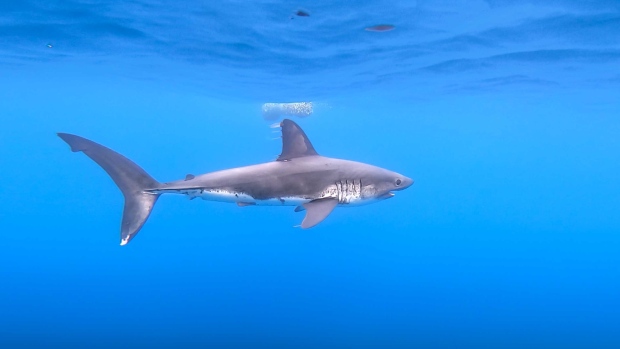 A salmon shark is shown swimming with a barnacle-covered log in the distance off Vancouver Island's coast. (Shelton Dupreez/Fisheries and Oceans Canada)