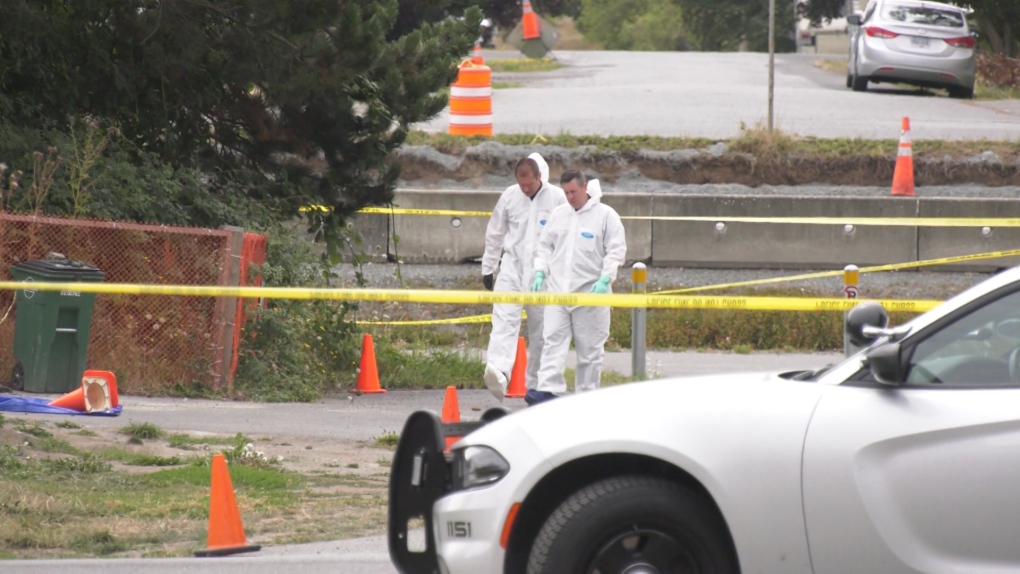 Saanich police were called to Crease Avenue after neighbours found a man's body on the street.

A man's body was found in a Saanich neighbourhood Saturday morning, prompting police to block off multiple streets.

Heather Allensen said she heard some yelling at around 6:30 a.m. and two hours later, she made a grisly discovery.

"I looked out my front window and I saw an elderly lady standing on the grass on the corner by herself. So I went over to talk to her to see if she needed anything and that's when she pointed at the body across the street," she told CTV News.

She said the man was wearing dark track pants and was not wearing a shirt and shoes. She believes he was in his 20s or 30s and he had long hair and a long beard.

"All I saw was a bunch of blood because I didn't get close enough," Allensen said. "I didn't recognize the guy. I know he's not from our street."

Saanich police confirm they started an investigation near the 100 block of Crease Avenue just before noon.

Traffic was being rerouted as yellow police tape blocked off the intersection of Crease Avenue and Seaton Street.

Galloping Goose Trail was also shut down to all vehicle, pedestrian and bicycle traffic.

Police on scene would not provide any further details.

On Sunday, Saanich police tweeted that they were still in the area and asked members of the public not to cross any police tape they come across.

Officers are still in the area of Crease and Wascana, including along the Goose, as we investigate a suspicious death. If yellow police tape is up, please DON'T cross it.#yyjtraffic #yyj pic.twitter.com/KoMLdSxkXA

Connie Dunwoody was cycling on the Galloping Goose Trail Sunday morning when she was forced to take a detour because of the investigation.

"I use the Goose a lot," Dunwoody said. "It's a very heavily travelled thoroughfare for bicycles and e-bikes and all that kind of stuff into town and back, so it's a bit inconvenient."

She said the news of the incident didn't worry her as much as it made her sad to know that someone had died.

This is a developing news story and will be updated as information becomes available.