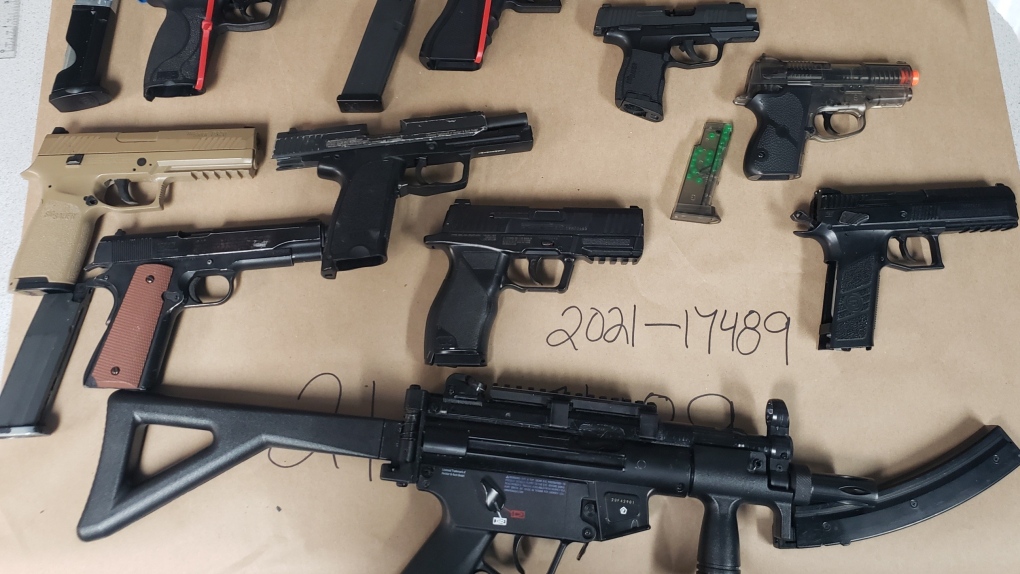 Saanich police say a man and woman known to police were arrested at the scene. (Saanich Police Department)
Victoria -

Saanich police say a traffic stop resulted in the seizure of replica guns, drugs and the arrest of two people.

Police say patrol officers pulled over a suspicious vehicle on the Patricia Bay Highway on Aug. 2 and found 10 replica handguns inside.

They also seized drugs believed to be fentanyl, methamphetamine and psilocybin.

Saanich police say a man and woman known to police were arrested at the scene.

The investigation is ongoing and charges are expected, police said.

Canada has now fully vaccinated 80.09 per cent of the country's eligible population.

R. Kelly, the R&B superstar known for his anthem 'I Believe I Can Fly,' was convicted Monday in a sex trafficking trial after decades of avoiding criminal responsibility for numerous allegations of misconduct with young women and children.

Despite the ruins of Tikal being one of the most thoroughly studied archeological sites in the world, archeologists have recently uncovered a hidden neighbourhood near the ancient Maya city.

A pair of American siblings have returned home after China lifted an exit ban following Canada's release of a top Chinese tech executive who had been wanted in the U.S. on fraud charges.

First-time MPs get first taste of their new jobs

Newly-elected MPs caught a first glimpse of what their new roles in Ottawa will entail, participating in the initial phase of the House of Commons orientation program on Monday.