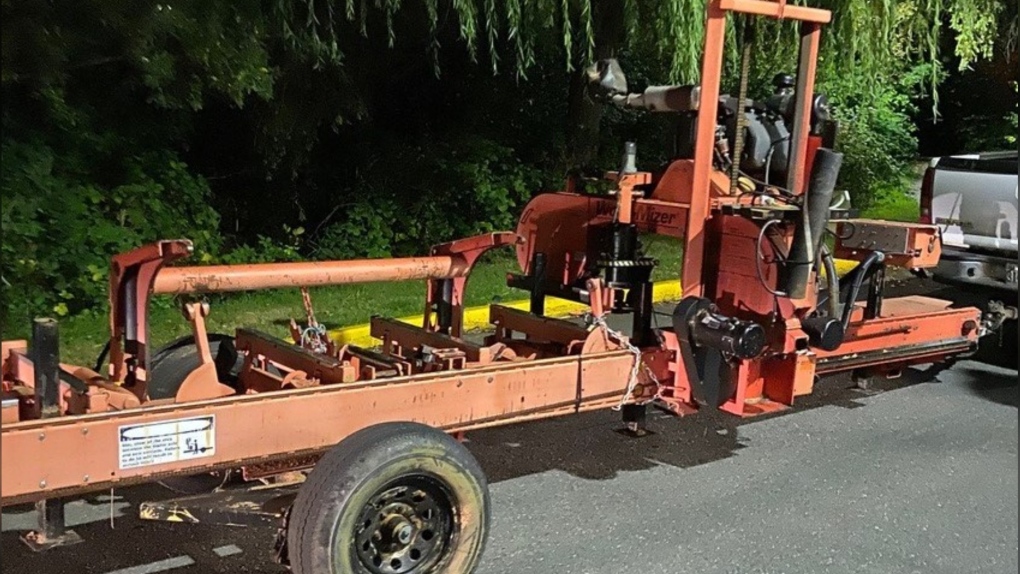 Saanich police say a work truck belonging to a Nanaimo fish hatchery and a portable sawmill stolen in the Ladysmith area were recovered in Saanich less than 48 hours after they were reported stolen.

Workers at the Nanaimo River Hatchery told CTV News Monday that they were left scrambling after the work truck, and several items that were with it, were stolen that morning.

"We came in and looked around and, sure enough, our truck was missing, as well as a pressure washer, some electronics out of one of our boats," said hatchery assistant manager Brian Hermann.

The theft was shared widely by police and on social media and on Monday evening, Saanich police say that a witness had spotted the stolen work truck and sawmill in a parking lot in the 4600-block of Elk Lake Drive.

The witness told police that they had recognized the sawmill as being stolen from the Ladysmith area over the weekend from social media reports.

Officers then arrived at the scene and located the vehicle, the sawmill and a driver operating the stolen truck.

The driver, a 34-year-old man from Ladysmith, was taken into police custody and is facing a number of charges including possession of stolen property over $5,000, possession of break-in instruments, possession of a controlled substance and two counts of driving with a suspended licence.

“The quick sharing of information over social media played an important role in this file and we would like to thank the witness for alerting us,” said Const. Markus Anastasiades, Saanich police.

“This is another great example of how the police and public work together to help solve crime. Both owners of these items, Wildwood Ecoforest and the (Nanaimo River Hatchery) are non-profit organizations and these items were very valuable pieces of equipment,” he said.

Workers at the hatchery had told CTV News that the theft of their work truck could not have come at a worse time, as the hatchery was in the midst of its busiest time of the year.

Workers at a Vancouver Island fish hatchery were left scrambling Monday morning when they discovered some of their valuable equipment had been stolen over the weekend.

Nanaimo River Hatchery assistant manager Brian Hermann says dog-walkers noticed the locks were cut off and the gates were left open at the hatchery and called police when they became suspicious.

"We came in and looked around and, sure enough, our truck was missing, as well as a pressure washer, some electronics out of one of our boats," Hermann said.

The truck theft couldn't have happened at a worse time for the hatchery, he added.

"We're just getting into our busiest week and a half or two of the year right now," he said. "Basically we're working 16-hour days from now until mid-October, so we use it for hauling fish, hauling gear to the river."

Hermann says one of the most important pieces of equipment stolen was a fish transport tank, however the tank was recovered in the bush up the road from the hatchery.

"One of the people on Facebook was out quadding or dirt-biking up there and came across it and sent us information on where to find it and we were able to recover that," he said.

The workers have since rented a truck to do their work but hope someone will spot their pickup and report it to police.