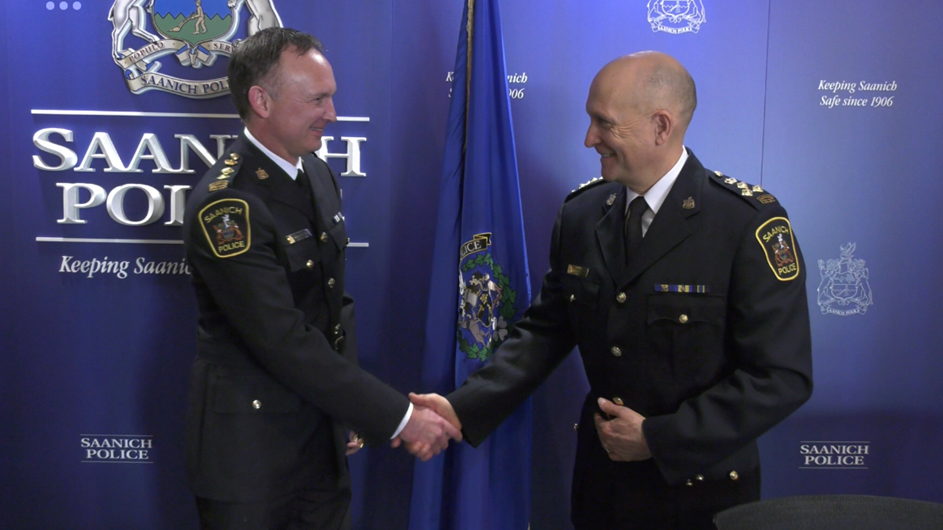 The Saanich Police Board announced Thursday that Deputy Chief Dean Duthie will become the 18th chief of the district’s police department on Feb. 1, 2022.

The 26-year veteran of the Saanich Police Department will replace outgoing Chief Const. Scott Green, who will retire on Jan. 31, 2022. Duthie has served as a deputy police chief alongside Deputy Chief Gary Schenk since 2020.

Saanich Mayor and police board Chair Fred Haynes says the board made the decision to promote Duthie to chief constable after thorough and competitive process.

“We’re going to continue with the same type of leadership that’s led the department to be one of the top police departments in Canada that deliverers emotionally informed policing to the residents of Saanich,” said Haynes. “I think when we look at the safety index for Saanich, I think its one of the best in B.C., so on that side of the equation the residents of Saanich can sleep easy.”

Duthie says during his career, policing has become more complex, with police officers seeing more calls for people suffering from mental health or addictions issues. He says he has also seen a rise in violent crime in Greater Victoria.

“A lot of those instances didn’t happen within the jurisdiction of Saanich, but that doesn’t make us immune from the issue and this ongoing problem,” said Duthie. “By collaborating and working with our neighbouring police departments as well as some social service agencies, that is where some solutions will be identified and pursued.”

Since starting his policing career with the Saanich Police Department, Duthie has progressed through the ranks. In his 26-year career, he has gained a wide range of experience on police operations, investigations and administrative roles. He was promoted to acting deputy chief in 2019 prior to his promotion to deputy chief in 2020.

Duthie says that one of the key priorities he will address when he assumes the role of chief constable in February is improving equity, diversity and inclusion within the Saanich Police Department.

“This is an area we’ve been paying close attention to in the last year to two years,” said Duthie. “We’re looking to continue this by infusing it into everything we do in the organization from recruiting to training and the way we conduct business.”

“This is going to be accomplished by internal means, but also through enhanced community partnerships and engagements to ensure that our learning continues and that we can move forward in a positive and productive way,” he said.

In addition to selecting Duthie as the Saanich Police Department’s 18th chief constable in its 115-year history, the police board also promoted Insp. Robert Warren to the position of deputy chief constable effective Feb. 1, 2021. Warren will fill the role vacated by Duthie and will work alongside current Saanich Police Department Deputy Chief Gary Schenk.