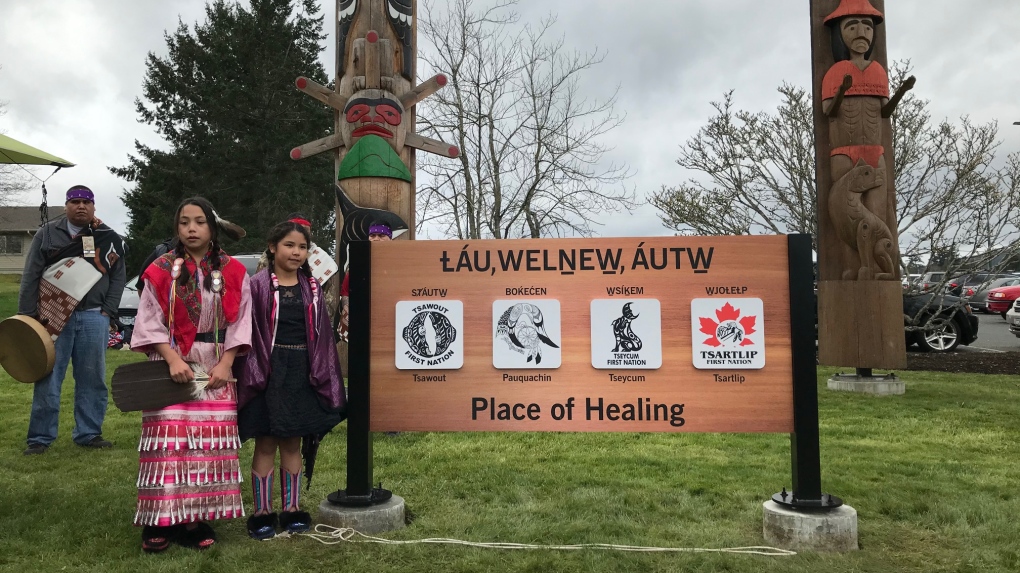 VICTORIA -- The Saanich Peninsula Hospital was given a new local Indigenous name during an unveiling ceremony Tuesday on hospital grounds.

The new name, ŁÁU,WELNEW,ÁUTW, translates to “a place of healing”.

The W̱SÁNEĆ (wh-say-nuch ) people say it is more than just a name, however. By adding their own chosen name to the hospital, the hope is that W̱SÁNEĆ people will feel more welcome when coming to the facility for treatment.

Drumming, song, prayer and blessings were just part of the hour-long witnessing ceremony at the Saanich Peninsula Hospital, which was attended by the four First Nations involved with the building's naming, the Tsartlip, Tsawout, Pauquachin and Tseycum First Nations. Hospital staff, dignitaries, and a few patients were also participating in the ceremony.

The unveiling of the sign comes after several years of work and effort by the W̱SÁNEĆ Nation in partnership with Island Health.

The name, which has been chosen by the W̱SÁNEĆ people, was approved by four local chiefs and language experts. The sign is in the SENĆOŦEN language of the Coast Salish people and is their word for Mount Newton.

Tom Sampson, of the Tsartlip First Nation, said that the hospital's name had to be invented.

“We were trying to use a different way of describing what a hospital is in our language, that’s when we came up with that word ŁÁU,WELNEW,ÁUTW (SA-WAY-UN-NUK),” he said.

“A place of healing, it’s a name with a great deal of healing,” said Dr. David Robertson, executive medical director for Island Health. “I don’t think that it just refers to health; it refers to relations and sense of community as well.”

The hospital's new name can be seen on a sign just outside of the main entrance to the hospital with a backdrop of four totem poles.