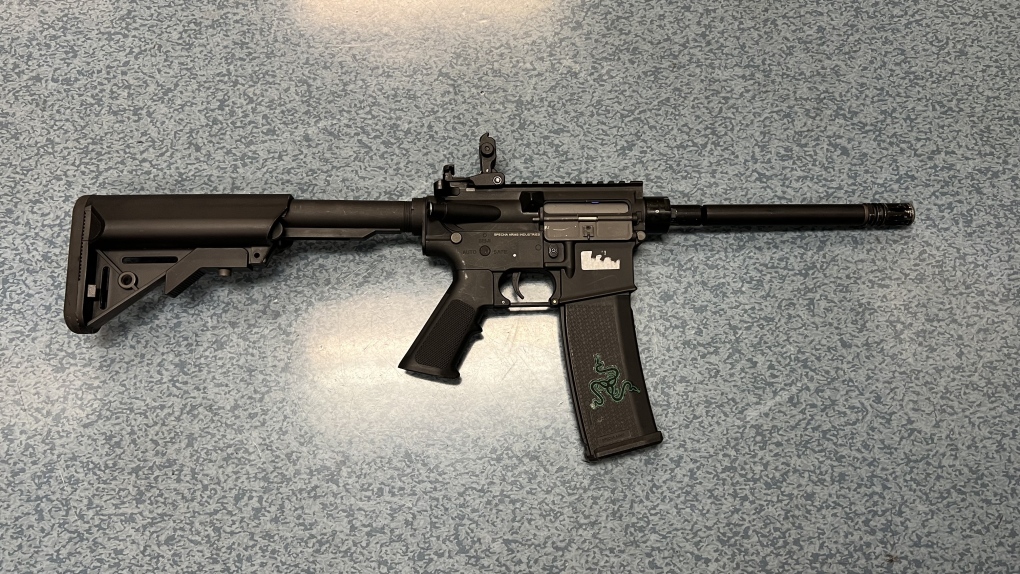 The airsoft gun is the man was holding is pictured. (Saanich Police)

A 19-year-old man was arrested early Monday morning and a business complex was briefly evacuated after police received a report of someone carrying a gun near Cedar Hill Middle School in Saanich, B.C.

Police say they received a report of a man walking on the field of the school with a gun around 6:10 a.m.

While officers were heading to the scene, police received an update saying that the man had pointed the gun at a passerby, and that he was walking towards a business complex at the intersection of Cedar Hill Road and McKenzie Avenue.

"Due to the concern for public safety, police closed down the immediate area to traffic and also evacuated persons inside the complex," said Saanich police in a release Monday.

Police say they found the suspect inside the parkade area of the building, and that he was carrying an airsoft gun that "looked identical to a real semi-automatic rifle."

He was arrested at the scene and is facing one count of possession of a weapon for a dangerous purpose.

"Imitation firearms pose a significant risk to the public, as police treat them as real until proven otherwise," said Saanich police Const. Markus Anastasiades in a statement Monday.

"Imitation, airsoft, paintball or similar weapons should never be carried or used in public spaces," he added.

Police say the 19-year-old man is known to the department, and he remained in custody Monday morning.

While officers received a report that the man had been pointing the airsoft gun at bystanders, police say they do not believe he was seeking any specific person.

"While we are still working on why this man was walking around with a weapon in public, we have no information to suggest he was targeting any person or location," said Anastasiades.

Jamaica's prime minister declared a widespread state of emergency on Tuesday to fight a surge in gang violence on an island with one of the highest murder rates in the region.

opinion | How to get the increased GST tax credit

To help combat inflation and help lower- and modest-income families, over the span of six months, Ottawa is issuing an additional one-time GST tax credit to eligible taxpayers. Personal finance contributor Christopher Liew breaks down who's eligible for the increased GST credit, explain how to get it, and how much you could receive.

Amid a shortage of firefighters across Canada, the Canadian Association of Fire Chiefs (CAFC) is calling on the federal government to address the grave impact these shortages will have on vulnerable communities.