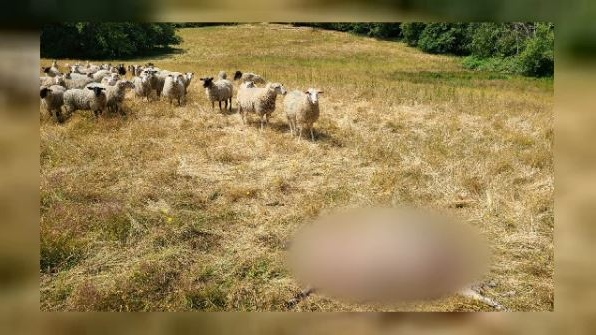 A Metchosin farmer says he is concerned after nearly one dozen of his sheep were killed by a bear since the beginning of July: (Submitted)

VICTORIA -- In an effort to elude a predatory bear, the owner of Parry Bay Sheep Farm in Metchosin is moving a part of his flock to safer pastures.

Since July 5, farm owner John Buchanan has seen 11 of his sheep killed by a roaming bear. In his more than 50 years of farming in the West Shore community he has lost livestock to cougars and dogs. He says the loss of even a single animal hurts his bottom line.

"It's been an issue for a number of years now, but this particular bear is quite a nuisance," Buchanan told CTV News.

"It usually gets breeding stock so that's not sustainable," he said.

Buchanan's farm is one of the largest on southern Vancouver Island, with a flock of 275 sheep and 600 lambs.

He says the worst year for livestock loss was in 2017 when the farming community in Metchosin lost 65 sheep to a bear. He says the issue of bears killing sheep has been growing over the past few years.

"We had no issues with wild predators until 1995, and then cougars were bad until about 2012," said Buchanan.

"Since then it has been bears, and if it carries on it will be bad," he said.

He says in the past few years, bears have killed sheep in at least 12 of the 30 pastures where his sheep graze. On Friday, he moved 20 sheep away from a field where a bear had recently killed an ewe. But, he says moving the flock away from the possible threat of a bear isn't a solution to the problem.

"The best plan is to get a good situation where this particular bear is caught. Not every bear but just the ones that are particularly bad," said Buchanan.

"If we can get [conservation officers] in the right situation when they are available, maybe they’ll jump on it for us."

Buchanan says he and others in the farming community understand the challenge B.C. conservation officers (CO's) face when dealing with a problem bear. In the past, CO's have setup traps to try and capture the bears and at other times they have been able to track the bears with specially trained dogs.

"Sometimes if the bear comes back to the kill they can catch it in a live trap," said Buchanan. "Other times if the bear has just eaten its kill it may go off to sleep. They can be surprised with dogs and they'll go up a tree."

Buchanan says that installing electric fences to keep bears out of his 30 pastures is simply too expensive and the fences would be costly to maintain.

"It's another serious issue with the farming picture on the lower island and it could have a big impact," he said. "To upgrade, to be really protective, is just not possible."

Buchannan says over the past 10 years he has lost more than $70,000 worth of livestock to wild predators.