Residents of the newly dubbed “Chattel City” at Reeson Park held a press conference Tuesday afternoon to “collectively speak out against the displacement and criminalization of homeless people, and the need for social housing to solve the housing crisis,” the group said in a news release.

"Our camp is here demanding affordable social housing, or at least a place where we can permanently set up camp," said Roland Hanna.

Activists supporting campers were also at the event, saying income assistance levels aren't enough to get homeless people into a place of their own.

"Here in B.C., we're at a poitn where it has been over a decade since the last increase in income assistance rates," said Stephen Portman of the Together Against Poverty Society. "The average rental accomodation for a bachelor apartment in the City of Victoria is around $800. Income assistance for shelter is $375."

The encampment at Reeson Park, on Victoria’s waterfront near the Johnston Street Bridge, still falls under the city’s camping bylaws, which forces residents to take down their tents between the hours of 7 a.m. and 7 p.m. daily.

Campers are alleging that they suffer police harassment and theft from city bylaw officers “which exacerbates physical, mental and emotional stress.”

Activists also say they're concerned that a city proposal to give the park a dramatic facelift including a "playable" art installation will displace campers because of a bylaw that prevents people from sleeping on or near playgrounds.

Former residents of “Super InTent City,” which sprung up on the lawn of the Victoria Courthouse for months starting in 2015, are also expected to speak out on their continued fight for “autonomy and self-determination” after being moved to supportive housing.

The courthouse camp, which did not fall under city bylaws because it was on provincial land, was shut down by the provincial government In August 2016 after it was deemed unsafe for campers.

The latest camp at Reeson Park is already attracting attention from one outspoken resident who calls it “a mess.”

David Bratzer, a Victoria police officer speaking on his own volition, wrote on his personal blog last week that the park has been filled with “a mixture of vagabonds and criminals, activists and agitators.” He said police resources are being expended on the camp to ensure campers take down their tents each morning to comply with the city’s bylaw and that “tensions with neighbours are rising.”

Bratzer clarifies on his blog that his views do not represent those of the Victoria Police Department.

Proposed redesign for Reeson Park below: 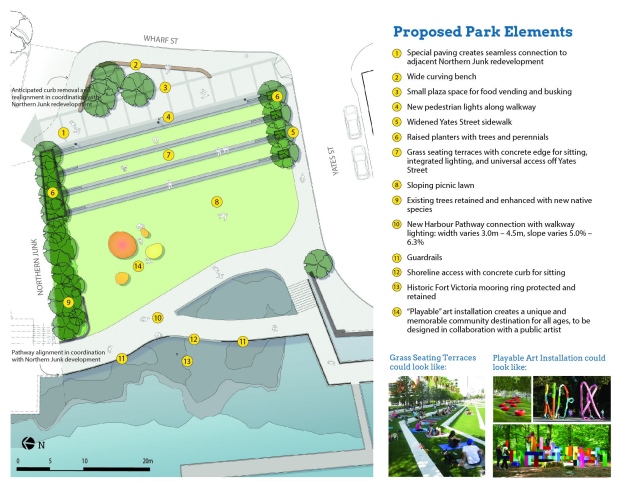