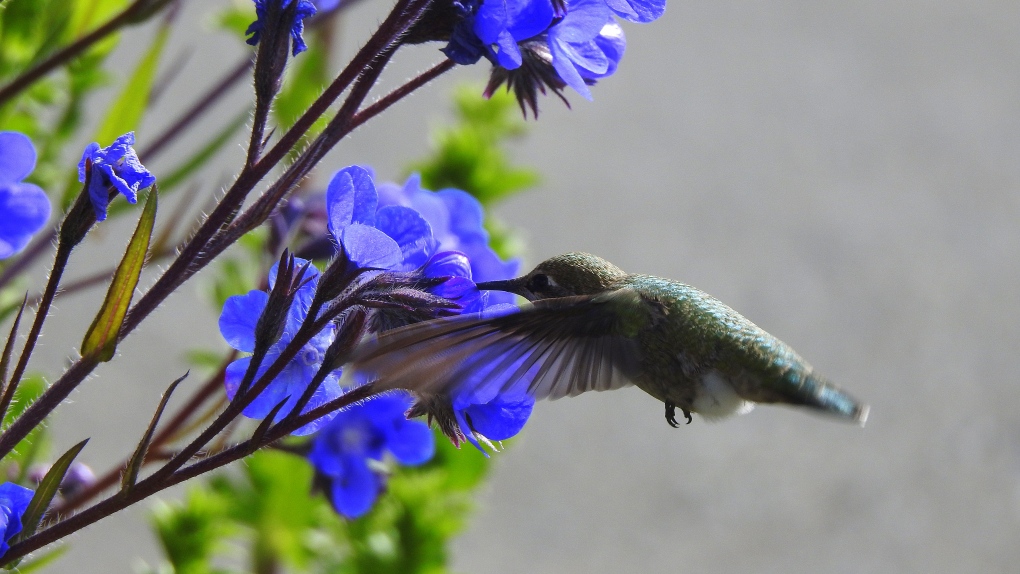 A hummingbird hovers near some flowers in the Comox area. (Photo courtesy Tanja Kerr)

The Wildlife Rescue Association says it has responded to more than 75 calls in just a few days from people who have found distressed, freezing or starving hummingbirds.

The group has rescued 10 hummingbirds and expects more help will be needed over the weekend for the birds that stay in southern B.C. year-round instead of migrating south for the winter.

The centre says if people want to help, they should get additional feeders and alternate them when they freeze.

It says hummingbirds need to eat almost constantly and can consume half their weight in pure sugar every day.

The centre has received a report of a bird passing out at a feeder from the cold. If that happens, the group says people are advised to use a towel to pick up the bird, put it in a box with air holes along with the feeder, before bringing it inside to a quiet location overnight.

“Winter becomes a survival crisis as insects and nectar from flowering plants becomes depleted during freezing weather,” the group says in a news release. “Without proper care and nutrition, cold temperatures can lead to the starvation and death of many hummingbirds.”

Janelle Stephenson, the association's hospital manager, says the danger signs to watch for in the birds include weakness, confusion, visible injuries, birds that are on the ground or are unable to fly.

This report by The Canadian Press was first published Jan. 17, 2020.