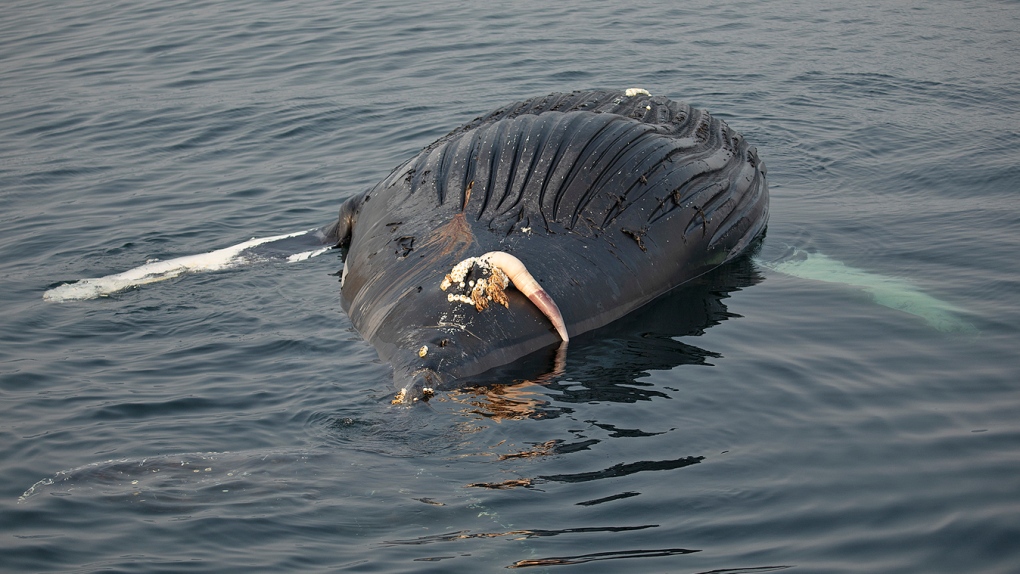 VICTORIA -- A Victoria whale-watching boat came upon a dead humpback whale this week, prompting concern among researchers that the mammal may have been struck by a vessel in the busy shipping lanes of the Juan de Fuca strait.

The Pacific Whale Watching Association says the humpback was discovered floating in the strait Wednesday by an Eagle Wing Tours boat.

The whale had died recently and was found belly-up with its head submerged and tail visible from the surface.

"It was a very sad sight to see," said Val Shore, a naturalist for Eagle Wing Tours, in a statement Friday. "We circled slowly around the whale to get photos from all angles, looking for signs of injury or entanglement."

The whale has been identified as Hawkeye, a young male first sighted and catalogued in 2016.

Shore had seen Hawkeye as recently as Sept. 22, when she photographed him off Otter Point, west of Sooke. Shore said the humpback appeared healthy at that time.

The naturalist said there were no obvious signs of injury on the carcass, but the whale-watching association says "since the whale was found next to busy shipping lanes, there is concern among the professional naturalist community that the whale was struck by a passing ship."

The association says the whale carcass should be retrieved for a necropsy so a definite cause of death can be determined. However, the group is asking for the public's help finding the body again.

The carcass was last seen floating near Clallam Bay, along the interior coast of Washington state. Authorities are asking anyone who knows its current whereabouts to contact Fisheries and Oceans Canada at 1-604-240-3841 or the U.S. Stranding Network Hotline at 1-866-767-6114.

The whale-watching association says photos of the dead whale have been shared with marine mammal authorities at Fisheries and Oceans Canada, as well as with humpback researchers in the region.

"While significant efforts are underway throughout the maritime community on both sides of the border to reduce such vessel strikes on whales, if this whale was indeed struck and killed by a ship it would mark the fourth humpback whale struck and killed by large vessels in this region over the past two years," according to the Pacific Whale Watching Association.

Those previous strikes include a May 2019 incident in which a Washington state ferry struck and presumably killed a humpback as the ferry was departing Elliott Bay in Seattle.

In July, a second humpback was struck and killed by another Washington ferry off the Mukilteo ferry landing, southwest of Everett, WA.

The association says another young humpback was found dead this summer off the outer coast of Washington state.