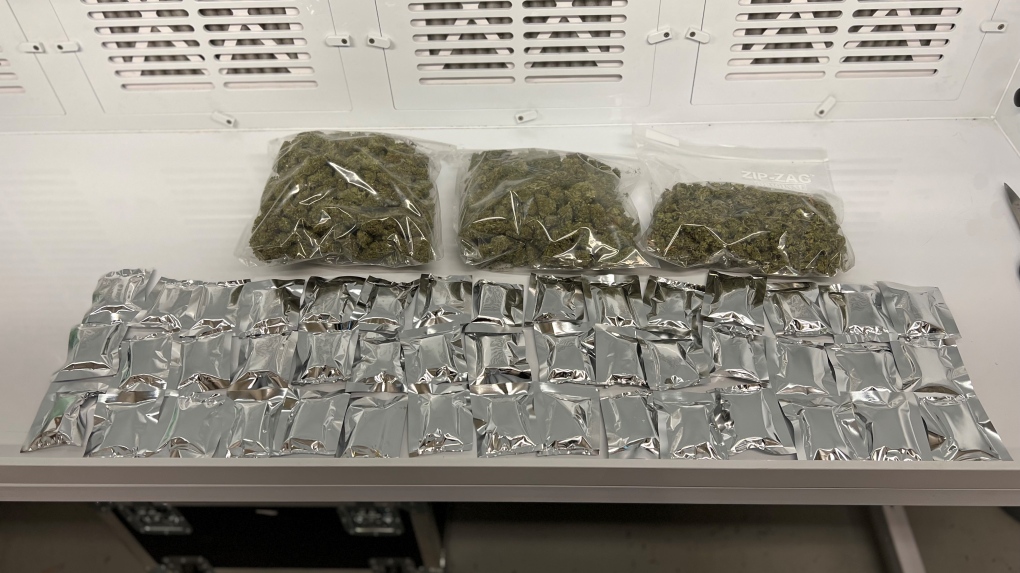 The seized cannabis is shown. (RCMP)

Police say they seized hundreds of grams of cannabis and dozens of packages of edibles when they were conducting traffic stops on southern Vancouver Island over the weekend.

Mounties say they checked over 1,000 vehicles at traffic stops in Duncan, B.C., the Cowichan Bay area, and along the Trans-Canada Highway on Sept. 24.

During those checks, 28 violation tickets were issued, 30 written warnings were handed out, three prohibited drivers were stopped, and 15 citations were served – including one for excessive speeding and two for impaired driving, according to RCMP.

One of the more eventful stops included the seizure of over 480 grams of dried cannabis, and 45 packages of edibles.

Police say the weekend traffic stops were largely well received by the community. The checks included officers from the North Cowichan/Duncan RCMP, the British Columbia Highway Patrol, and police dogs.

"Officers received positive feedback from the general public during this enforcement operation," said Cpl. Alex Bérubé, spokesperson for the BC RCMP in a statement Thursday.

"These traffic initiatives are routinely undertaken to ensure compliance with the Motor Vehicle Act and Road Safety for all motorists, as a part of the North Cowichan/Duncan RCMP’s commitment to public safety," he said.

Health care has surpassed inflation and jobs as the top national issue of concern, according to Nanos Research’s weekly tracking, as Canadians read reports of hospital emergency rooms under strain and a 'tripledemic' of flu, RSV and COVID-19 cases spiking across the country.

List of areas the Alberta government accuses Ottawa of overreaching

When the Alberta legislature resumed sitting Tuesday, the first bill introduced by the United Conservative Party government was one aimed at shielding the province from federal laws it deems harmful to its interests.

Prince William's office said 'racism has no place in our society' as he sought to prevent the backlash over his godmother's treatment of a Black advocate for survivors of domestic abuse from overshadowing his trip to the United States.

As it happened: Morocco win 2-1, Canada finishes World Cup without a point

The Canadian men’s national team finishes its World Cup campaign without a point after a 2-1 defeat to Morocco. Canada had its chances but came up short. Re-live all that happened with CTVNews.ca's updates as the match unfolded.

As of today Canadians can apply for new dental benefit: here's how

Starting on Thursday, eligible Canadians can apply through the Canada Revenue Agency to receive funding as part of the first ever federal dental-care program, and as of Dec. 12 applications will open for low-income renters looking to access the one-time top-up to the Canada Housing Benefit.

The RCMP said investigators are searching a home in Vaudreuil-Dorion, a suburb west of Montreal, as part of a 'national security' operation. The national police force began its operation Wednesday night. Police at the scene would not say what led them to the house on Aquin Avenue, in Quebec's Monteregie region.

Footage of an upcoming documentary about Harry and Meghan released Thursday shows the couple is once again prepared to tackle their rift with the Royal Family head on and in their own words.

Certain packages of TUMS antacid have been recalled after tablets were found to contain fibreglass fragments, aluminum foil and 'other material,' according to Health Canada.