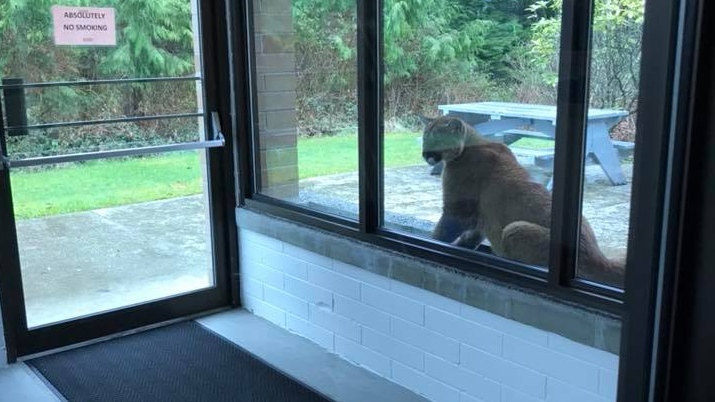 The large cat was spotted sitting on an outdoor ledge up against a glass window at the Port Hardy Hospital. April 10, 2018. (Courtesy Danielle Nye)

A cougar came a little too close for comfort to a hospital in Port Hardy Tuesday.

The large cat was spotted sitting on an outdoor ledge up against a glass window at the hospital, which is located just above the town centre.

Pictures taken by hospital worker Danielle Nye show the cougar casually taking in its surroundings, looking at employees behind the glass just metres away.

"He was actually there for a good 10 minutes I'd say, maybe longer," said Nye. "Just looking at us, just peering in…not afraid at all, hardly. He even just sauntered away casually."

The series of pictures shows the cougar eventually give up his perch and walk into a wooded area behind the hospital.

RCMP and a BC Conservation Officer responded to the report of the cougar but were unable to track it down due to heavy rain in the region.

"By the time I got there the cougar had moved on," said conservation offer John Paquin.

He said he couldn't confirm based on a picture whether the cat was a juvenile or young adult cougar.

Paquin said the animal appeared to be habituated to humans, and that concerns wildlife officials.

"There's some concerning behaviours, just it being out during the day in an urban area next to a busy public facility like that," he said. "We expect cougars to be on the north island. They all move through communities but they key is they should move. If they're hanging around then they're showing unnatural behaviours."

The Port Hardy area has seen an influx of cougar encounters in recent months.

A series of attacks in late December and early January left a number of pets maimed or killed and residents on edge.

"It's quite frightening because people's animals have been getting eaten by the cougars. A couple people have lost animals," said Nye. "It really worries me, because pets are part of your family."

Nearly a quarter of B.C.'s approximately 3,500 cougars are estimated to be living on Vancouver Island.