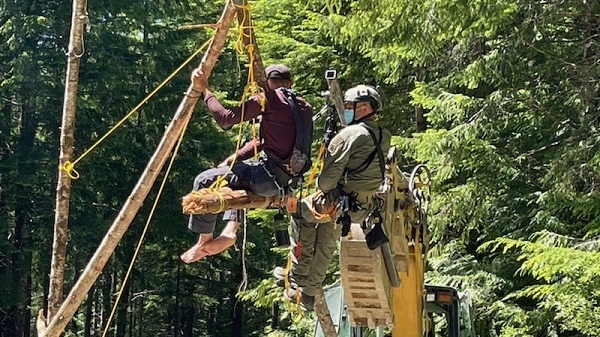 An old-growth logging protester is suspended from a bipod in the Fairy Creek watershed in June 2021. (RCMP)

PORT RENFREW, B.C. -- RCMP have arrested another 11 people at blockades set up to prevent old-growth logging on southwestern Vancouver Island.

The Mounties were enforcing an injunction Tuesday ordering the people off land in the Braden Mainline Forest Service Road area near Port Renfrew.

All 11 were charged with breaching the injunction, with one person also arrested for designing and building the locking devices which are actively being used to breach the injunction.

The RCMP began enforcing a B.C. Supreme Court injunction on May 17 ordering the removal of blockades and protesters at several sites.

Since then, 271 people have been charged, with at least 10 arrested more than once.

In addition to the 219 counts of breaching the injunction, 46 have been charged with obstruction, four with mischief, one for counselling to resist arrest and one for assaulting a police officer.

This report by The Canadian Press was first published June 22, 2021.