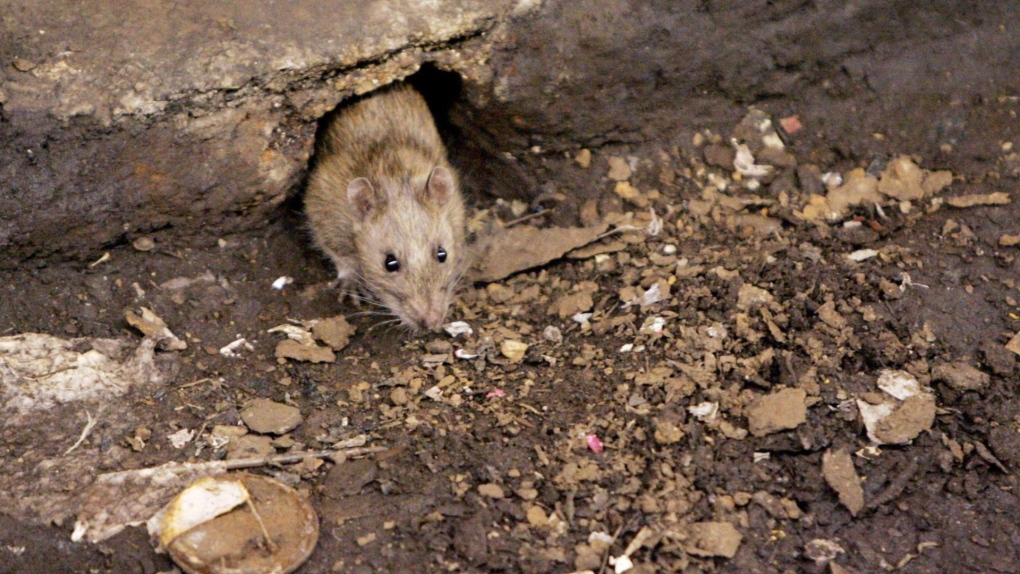 Abell Pest Control says it has seen a 50 per cent increase in rat-related calls in Canada compared to this time last year. (AP/Julie Jacobson)

VICTORIA -- With the widespread closure of restaurants and businesses due to the novel coronavirus pandemic, B.C.'s rodent populations are fleeing urban centres like rats from a sinking ship.

According to pest control experts, rats and mice are increasingly turning up in suburban and residential areas in search of food and water.

Bola Fagbamiye, regional manager of Abell Pest Control in B.C., says the migration has sent calls for their services skyrocketing.

"The issue is basically because of the lack of food," Fagbamiye tells CTV News. "You have restaurants shut down, you have businesses shut down – less garbage going out to the bins and the rodent population is stressed. So they'll look to alternative means of getting food and water."

He says the problem has been compounded by recently closed businesses cancelling their typical pest control orders, leaving rodent populations to grow.

Fagbamiye, who's been in the business for 25 years, says the problem is not just in Victoria and Vancouver, but smaller centres like Nanaimo, Courtenay and the B.C. Interior as well.

Abell Pest Control says it has seen a 50 per cent increase in rat-related calls in Canada compared to this time last year.

"This is not an issue that's limited to just Wharf Street in Victoria or limited to Oak Bay," Fagbamiye says. "This is something that's going on all over. Just think of the number of restaurants you have downtown that are now shut down – rodents were feeding on the garbage coming out of those businesses every day."

While there have been no reported cases of rats or mice spreading the novel coronavirus, the rodents can spread approximately three-dozen diseases to humans either directly through contact or indirectly, according to the U.S. Centers for Disease Control and Prevention (CDC).

"Rodents are vectors for disease, everything from salmonella to food poisoning," Fagbamiye says. "They will track through garbage and then walk through food-handling surfaces."

Rodent fur can also carry bacteria and their droppings can trigger asthma attacks, he says.

Fagbamiye says the company has been getting reports of rats and mice cohabitating together – something he's not seen in more than two decades in the business.

Pest control experts advise residents who want to avoid attracting rats and mice to their property to look for burrows while landscaping, check for gaps under garage doors, search for cracks in foundations and remove standing water around buildings.

Canada establishes its own PPE supply chain in China amid pandemic

With many COVID-19 deaths in nursing homes, Tory MP asks whether economy can reopen

Ontario plans to extend state of emergency by 28 days

Truth Tracker: No, COVID-19 has nothing to do with 5G technology

COVID-19 to have 'immediate and drastic' impact on Canadian meat supply: industry group

Rats! COVID-19 is bringing another problem to Canadian streets