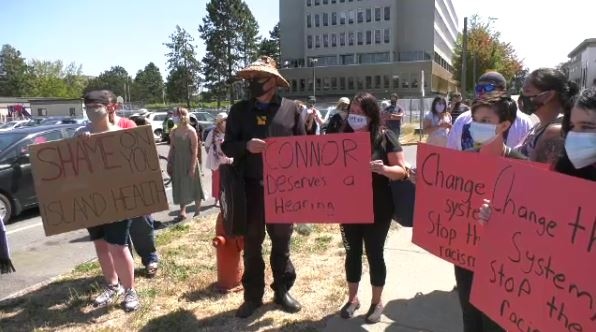 Demonstrators are seen rallying outside of a Victoria hospital in support of Connor Sutton: July 21, 2020 (CTV News)

VICTORIA -- A peaceful demonstration was held outside the Royal Jubilee Hospital in Victoria on Tuesday in support of a man whose family says he was only looking for medical help.

Demonstrators claimed that racism played a role in how an Indigenous member of the Canadian Armed Forces was forcibly removed from a Duncan hospital when seeking medical treatment on June 23.

Taliais Treena Black says that her 23-year-old son, Connor Sutton, was on leave from the military to attend a funeral on Vancouver Island in June.

When he began experiencing chest pains and confusion, he took himself to a hospital in Duncan.

Black says that Sutton was diagnosed with a hole in his esophagus and was discharged the same day.

One day later, Sutton returned to hospital and asked to be admitted because he was experiencing mental distress.

Sutton’s family says hospital staff told him to go to a homeless shelter instead, and he was forcibly removed from the building by security guards.

The next day, Sutton’s father drove him to the Royal Jubilee Hospital in Victoria, where he remains. It’s also where demonstrators rallied on Tuesday to call for a review of what happened.

“While there are amazing people and nurses working inside the hospital, this (shows that) systemic racism against Indigenous people is alive and well today,” said Black.

“It needs to be addressed and brought into the light. Changes need to happen,” she said.

Black says that the Duncan hospital has scheduled a hearing for July 31 to review what happened.

In a statement, Island Health told CTV News, “We acknowledge systemic anti-Indigenous racism occurs within the health-care system, including at Island Health.”

Island Health added that it has had ongoing meetings with Indigenous leaders to discuss what immediate actions can be taken to address racism across the health authority.

On Wednesday, the B.C. First Nations Leadership Council said in a release that it was in full support of Sutton and the call for a review of the incident.

“A young man, hurt and confused, walks into a hospital expecting help. He is instantly racially profiled and is viewed as a homeless, intoxicated threat, not worthy of care and respect,” wrote Robert Phillips, First Nations Summit political executive.

“Connor’s horrendous treatment by hospital staff is not unique in its prevalence and commonality.”

Phillips adds that what happened to Sutton echoes allegations of a “racist game” that was played in at least one B.C. emergency room earlier this year, which prompted a provincial investigation.

The game involved staff at the hospital emergency room allegedly trying to guess the blood-alcohol level of Indigenous patients that arrived.

The B.C. government has since appointed independent investigator Mary Ellen Turpel-Lafond to investigate the allegation, and to review B.C.’s health-care system as a whole.

Earlier this month, Turpel-Lafond announced that B.C. had opened up a new, confidential anti-racism hotline, website and survey to help collect reports and information on how systemic racism has affected Indigenous residents of the province.