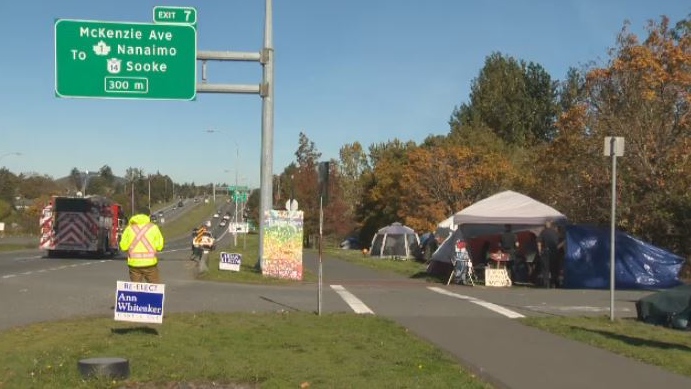 Residents of a roving tent city protest that set up camp on provincial land in Saanich over the weekend are being told to vacate.

Campers tweeted images of a "trespass notice" handed out by the Ministry of Transportation and Infrastructure Monday morning.

The notice informs residents that their occupation of the piece of land, next to the Pat Bay Highway and Saanich Fire Hall, is not authorized and that campers must move immediately.

"If you do not cease your occupation of the Lands, you will be trespassing pursuant to the Trespass Act. You are directed to immediately vacate the Lands. Failure to do so is an offence under the Trespass Act," the notice reads. It then warns campers that they could be arrested if they fail to comply.

Residents of the tent city had moved to the new location Saturday, saying it was part of a calmer, more cooperative approach to affordable housing.

They had previously been staying at a private property, where they had been staying for nearly two weeks but left on Friday at the behest of the landowner.

Campers said the new patch of land along the highway was on the same land that had been offered for modular housing by Saanich, but deemed impractical by the province.

It actually turned out that the new encampment was next to the parcel of land in question, and residents pitched tents on land owned by the Ministry of Transportation and Infrastructure.

Saanich police say they can't enforce municipal bylaws because the land is under provincial jurisdiction.

The group said it chose the location in an attempt to be less controversial. With neighbours expressing concern at previous locations chosen by the roving protest, campers said there were no such concerns with the provincial land.

"There are no houses, there are no neighbours who are close by who would feel unsafe for us being here," said organizer Chrissy Brett. "If there's a medical or any other emergency, we have all our emergency services right here."

The Ministry of Municipal Affairs issued a statement, saying while shelter spaces were offered to all of the campers, the majority declined.

"Their new location in Saanich is not a workable or long-term solution for anyone," it said. "Highway land is not a safe location for camping, and campers will be asked to leave the highway right of way."

Campers had previously been ousted from a patch of Ministry of Transportation land next to the Pat Bay Highway after moving there from Regina Park, where the previously camped for several months.

The ministry said it is up to local governments to identify potential land for modular housing.

The campground at Goldstream Provincial Park in Langford, where campers had previously stayed for more than two weeks, remains closed to the public as parks crews remediate the land.