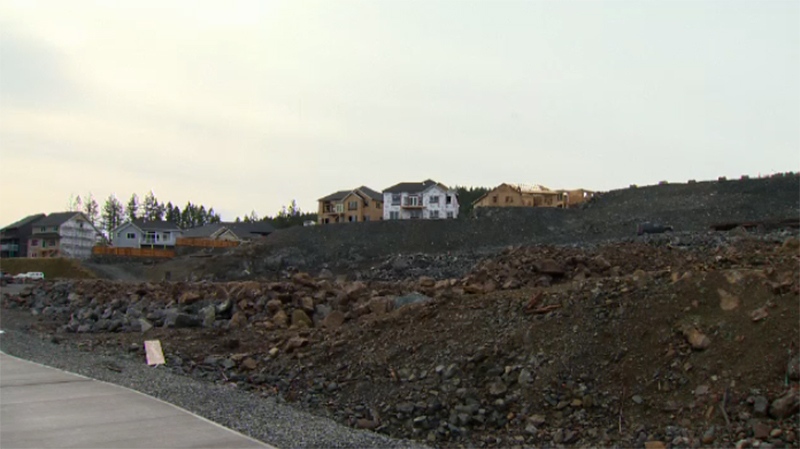 The province is providing $23.3-million for the purchase of 6.5 hectares of land in the Westhills area of Langford, at the corner of Westshore Parkway and Constellation Avenue. Dec. 18, 2017. (CTV Vancouver Island)

The province announced Monday it would spend $23.3 million to secure land for a new elementary and middle school on the West Shore, the result of years of lobbying by the local school district.

Education Minister Rob Fleming said the money will fund the purchase of 6.5 hectares of land in the Westhills area of Langford, at the corner of Westshore Parkway and Constellation Avenue.

The money only covers the acquisition of the land, but Fleming said he believes the schools could be built at a "significantly" rapid pace.

"To get a large, contiguous site like this, 16 acres of pristine land in an ideal location which will be at the heart of a community that has grown up a lot in the last 25 to 30 years…it's pretty rare and special to be able to do that," said Fleming.

The Sooke School District is considered the fastest-growing in B.C. per capita, outpacing even Surrey.

The province and district officials say adding two new schools will help relieve pressure at a number of schools that have been forced to build portables to accommodate the surge enrollment.

"This announcement should be able to reduce 20 or more portables in the immediate catchment area," said Fleming.

School District 62 Chair Ravi Parmar said it's growing at a rate of 400 to 500 new students per year.

He said the district would get to work in the new year on a Project Definition Report to look at the cost of building the schools and the size of the new buildings.

The district has been lobbying for four new schools, but said purchaisng land for two of them is a good first step to accomodating the region's booming growth.

The province also confirmed it was in talks with the district regarding a possible expansion at Royal Bay Secondary School in Colwood.