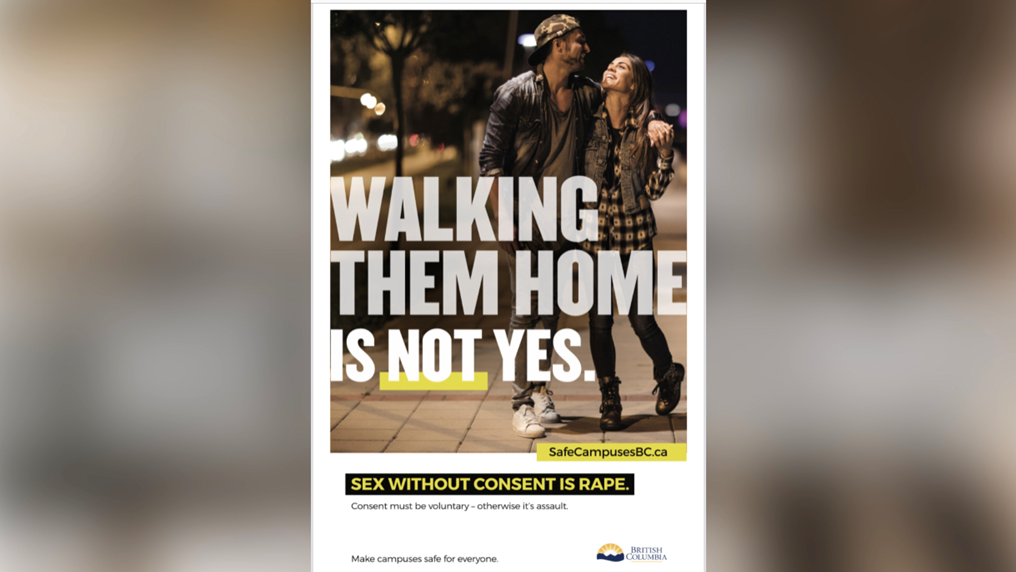 According to the B.C. government, almost two-thirds of sexual assaults on post-secondary campuses happen in the first eight weeks of school. That’s why it has re-launched the “… Is Not Yes” campaign.

"Sexual violence has no place on our campuses," said Anne Kang, B.C.’s Minister of Advanced Education and Skills Training, in a news release.

"Understanding consent is one of the first steps to preventing sexual violence, because only 'yes' means 'yes.’”

Kang says the messages about sex, consent and sexual violence in the campaign are direct because students have told the province that it needs to meet them in a thought-provoking and direct way.

The message of the “.. Is Not Yes” campaign is made clear with posters depicting a young college age couple walking within their arms around each other captioned, “Walking them home is not yes.”

University of Victoria student advocate Anna-Elaine Rempel told CTV News that education and awareness are essential to creating cultures of consent on university and college campuses.

“We need to challenge myths and societal values that uphold sexualized violence and really challenge that at the basis of what it is,” said Rempel. “That’s why this campaign is so important; we need to be talking about consent right from the get-go as soon as students get on campus and continue that conversation throughout the semester.”

The province says it is building on the “… Is Not Yes” campaign originally launched on post-secondary campuses in 2019. It says that after student input, the goal of the re-launched campaign is to reach more students through a larger online and on-campus presence.

"Our campuses and our communities are safer when people know that sex without consent is the crime of rape," said Ninu Kang, executive director of the Ending Violence Association of BC.

"Consent to sexual activity is needed every time, and must be freely given, specific, clear, coherent, enthusiastic and ongoing."

During September and October, digital ads will run on social media platforms commonly used by students, including Facebook, Instagram, Twitter and Snapchat. In an effort to reach all post-secondary students, the message captions will be presented in Mandarin, Cantonese and Punjabi, in addition to English.

Posters for the sexualized violence prevention campaign will be also be displayed in popular student gathering places, such as bars and restaurants.

“Consent is something that is important to our everyday lives, (so) it’s critical that we talk to students about sexualized violence and consent as soon as they get to campus,” said Rempel. “We want to make sure we are building a culture and a campus that fosters consent.”

If you or someone you know is a victim of sexual assault, contact VictimLinkBC, a toll-free, confidential, multilingual service available across B.C. and the Yukon 24 hours a day, seven days a week, by calling or texting 1-800-563-0808 or sending an email to VictimLinkBC@bc211.ca. You can also call your local police or 911.

CTVNews.ca asked two experts to answer common questions submitted by readers about Pfizer’s COVID-19 vaccine for children aged five to 11. Here's a look at their responses.

Actor Alec Baldwin fired a prop gun on the set of a Western and killed the cinematographer, officials said. The director of the movie was wounded, and authorities are investigating what happened. A spokesperson for Baldwin said there was an accident involving the misfire of a prop gun with blanks.

Kid-size doses of Pfizer's COVID-19 vaccine appear safe and nearly 91 per cent effective at preventing symptomatic infections in 5- to 11-year-olds, according to study details released Friday as the U.S. considers opening vaccinations to that age group.