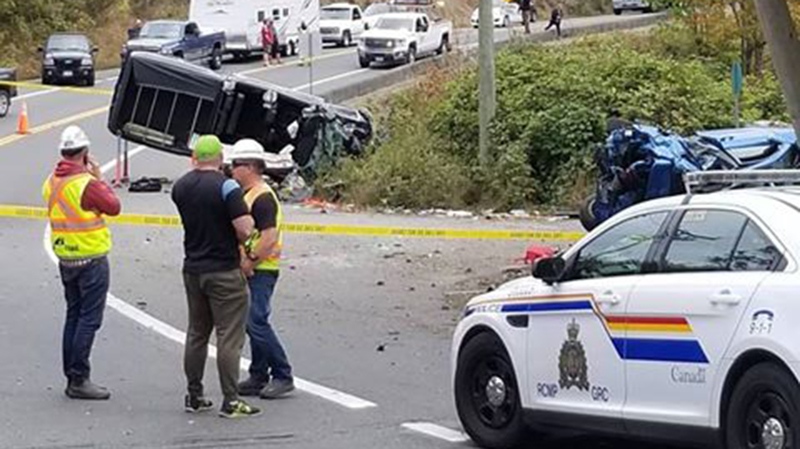 A crash on Sooke Road in 2018, where the province has announced new safety upgrades. (CTV Vancouver Island)

Horgan and Trevena were at the 17 Mile House Pub on Sooke Road Tuesday morning, talking to residents and answering questions.

"The investments will make the commute safer and more efficient for the thousands of people living in the western communities," Horgan said.

Safety improvements on Sooke Road have been underway as the government aims to reduce congestion by expanding the route to four lanes from Connie Road to Glinz Lake Road, and adding a cement median.

Included in the upgrades are plans for a new park-and-ride, as well as wider shoulders.

Sooke Mayor Maja Tait has been asking for safety upgrades for years.

"I'm very grateful to see a significant investment in the safety of Highway 14," she said.

The project has caused some frustration for residents along Sooke Road. The announced proposal requires the highway to be expanded, which will run it through 26 homeowner properties.

In six of those cases, residents are having their entire properties purchased by the province, which is forcing them to move.

Resident Angela Wylie is losing her home and her three-acre property. She moved there six years ago with her late husband and says it's where she was planning on retiring.

"I'm overwhelmed," she said. "It completely disrupts your life…now I have to start over."

Despite resistance, the government is moving ahead with the plans and construction could start in January.

"One good thing has come from this," joked resident Maureen Simms. "I've now met all my neighbours."

She said she's interested to see what offer she receives for the front corner of her property, which she's been told is required to make room for a right-turn lane onto Glinz Lake Road.

The proposed realignment of Sooke Road is just one part of a multi-stage plan that's also expected to address parking and transit concerns along the corridor.