VICTORIA -- Several dozen protesters slept overnight on the steps of the B.C. legislature as their demonstration of support for Wet'suwet'en hereditary chiefs opposed to construction of a pipeline in northern B.C. continued.

As dawn broke over the legislature grounds Tuesday, demonstrators rustled in their tents while police looked on. Other demonstrators slept out in sleeping bags next to pop-up tents and tables of food. 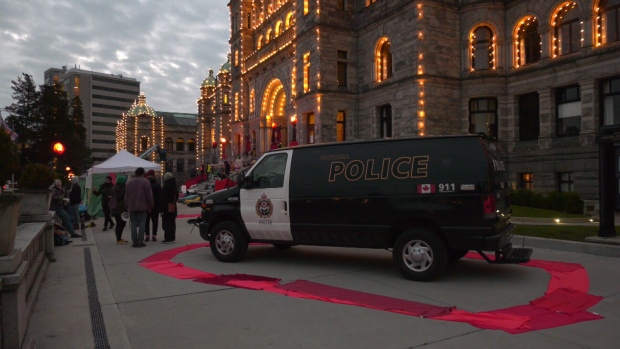 Protesters and police have been on site since just after 3 p.m. Monday when the demonstrators rushed the ceremonial gates of the building despite a court injunction prohibiting protests blocking legislature entrances.

There have been no reports of arrests.

“We are not here seeking arrest,” said Indigenous youth leader Ta'Kiaya Blaney, speaking with a megaphone on Monday evening. “We are here as our duty as Indigenous youth. Bring your blankets, it's going to be a long night.”

At about 7 p.m. Monday, the supporters blocked the progress of a police van that arrived at the legislature. They linked arms and chanted, “peaceful and with love, unarmed and non-violent.” 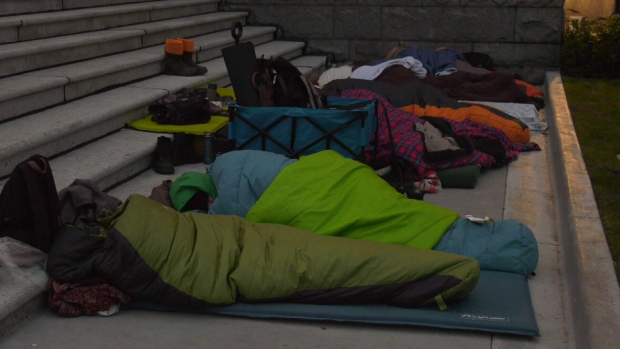 Several police officers got out of the van without incident.

The group placed a carved ceremonial mask on the ceremonial gates, saying it would look after them during their gathering. A fire they said was sacred was lit in a steel pit that was placed at the top of the legislature stairs.

The legislature was the scene of widespread protests on Feb. 11 that prompted the Speaker to obtain an injunction when entrances to the building were blocked.

Indigenous youth leader Saul Brown told the protest their cause is worthy despite the court injunction. 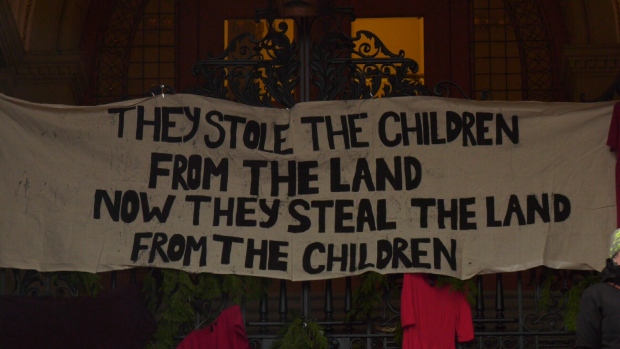 “We're asking you to stand with us shoulder to shoulder,” he said. “You are on the right side of history.”

While the demonstrators gathered at the legislature, others blocked a road leading to the Port of Vancouver, as well as tracks carrying a Lower Mainland commuter train and a rail line outside New Hazelton.

The moves came after police arrested 10 people and dismantled a rail blockade on the Tyendinaga Mohawk Territory in eastern Ontario, stoking tensions in the dispute even as it paved the way for train service to resume.

The blockade had been set up in support of the hereditary chiefs of the Wet'suwet'en Nation, who oppose the development of the Coastal GasLink natural gas pipeline project that crosses their traditional territory in northwestern British Columbia. The pipeline, however, has the support of elected band councils along the pipeline route. 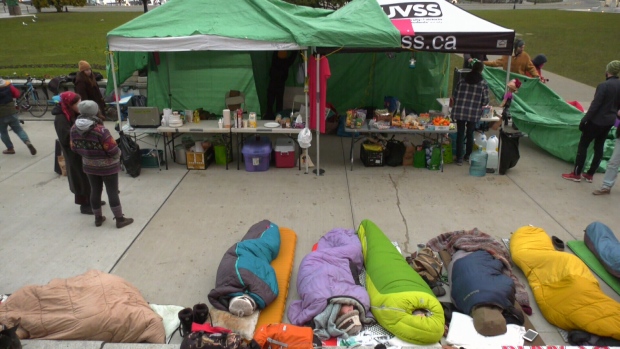 The Wet'suwet'en house chiefs set three conditions last week for meeting with federal leaders but a spokesman for the chiefs said Monday they haven't been met.

The chiefs have called for the removal of an RCMP mobile unit, the end of foot patrols and the removal of Coastal GasLink workers from their traditional territory as conditions for meeting with the federal government.