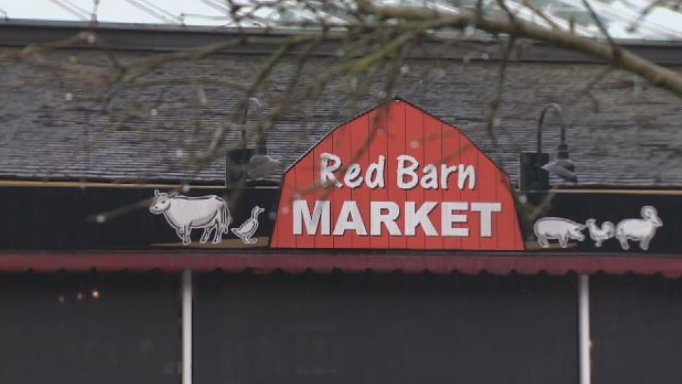 Two women are part of a proposed class-action lawsuit against a Saanich grocery store over allegations they were unknowingly filmed in a washroom by a former employee, with the images later surfacing online.

The claim alleges the women were filmed between 2009 and 2014 while using the washroom at Red Barn Market at Mattick's Farm, a popular grocery store in the Cordova Bay area.

Stills taken from the footage, as well as one of the victim's names and an offensive caption were allegedly posted to a Russian "revenge pornographic website," the claim says.

The plaintiffs say they only learned about the alleged footage when police contacted them in 2016 to show them images of themselves posted to the Russian website.

They claim a former co-worker captured the footage using a video recording device placed in the washroom over a lengthy period of time.

The washroom was used by employees but also available to customers on request, the women said.

In the claim, the women allege that the co-worker displayed a "sexually charged and disrespectful" attitude toward women and that in or around 2013, he exposed himself to a young female co-worker.

Saanich police acknowledged a civil lawsuit had been filed, and would only say an investigation was ongoing into multiple alleged incidents of a male co-worker secretly filming female co-workers in a staff bathroom at a store.

They said the investigation began Jan. 30, 2016, after one of the victims brought forward the allegations.

A suspect was arrested and released and formal charges have not yet been laid, according to police.

According to the claim, the women have learned of at least six other victims allegedly filmed in the washroom.

They said they're filing the proposed class-action suit to reach out to anyone else who believes they may have been filmed without their knowledge.

In addition to naming the former employee in the lawsuit, the plaintiffs are suing the business for general damages resulting from "negligence resulting in an invasion of privacy."

Red Barn Market issued a statement in response to CTV's request for comment saying it had been advised that the class-action lawsuit had been filed regarding a workplace incident.

"The matters referred to in the lawsuit(s) concern information that is private and personal," the statement said. "We must, and will respect the rights of those involved to have their privacy respected and protected."

The company declined to comment further on the lawsuit.