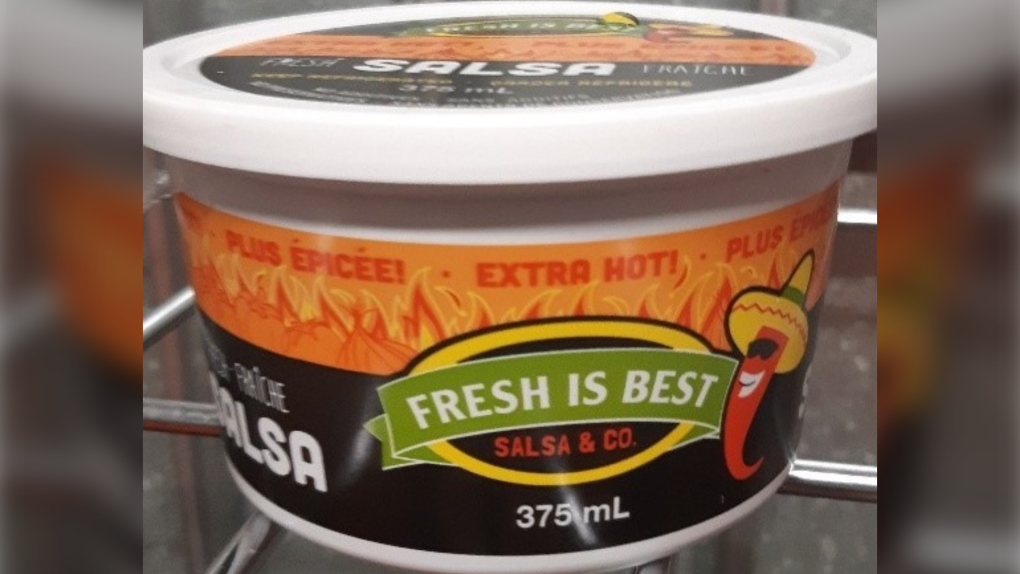 Among those products are seven varieties of salsa from Fresh is Best Salsa Co., in containers ranging in size from 220 millilitres to 2.2 litres. (Canadian Food Inspection Agency)

VANCOUVER -- Seven types of salsa, prepared salads and sandwiches are among the items made with contaminated onions from the United States that are now being recalled as a result of a Salmonella outbreak across Western Canada.

More than 200 people have developed the illness, which has been traced to red onions produced by Thomson International Inc., of Bakersfield, Calif.

On Friday, the Canadian Food Inspection Agency updated its recall to include a variety of products made with onions from Thomson International.

Among those products are seven varieties of salsa from Fresh is Best Salsa Co., in containers ranging in size from 220 millilitres to 2.2 litres. Four of the seven varieties were distributed only in British Columbia, while the other three were available in multiple Western Canadian provinces.

The recall also includes prepared sandwiches sold at IGA, Safeway, Sobeys and Thrifty Foods locations in Alberta, British Columbia, Saskatchewan and Manitoba, as well as a number of prepared salads sold only in B.C.

These products have been added to a list that already included red, yellow, white and sweet yellow onions from Thomson International. The Public Health Agency of Canada is advising anyone who is unsure where their onions were grown to discard those onions.

The CFIA advises anyone who thinks they became sick from eating contaminated onions to contact their doctor.

Anyone who bought any of the products subject to the recall should discard them or return them to where they were purchased, the CFIA says.

Symptoms of Salmonella include diarrhea, fever and abdominal cramps, which develop between six hours and seven days after exposure and usually last four to seven days, according to the British Columbia Centre for Disease Control.

Most people recover from Salmonella without treatment, but children under age five, adults over 65 and those with weakened immune systems are more likely to have severe illness, the centre said.