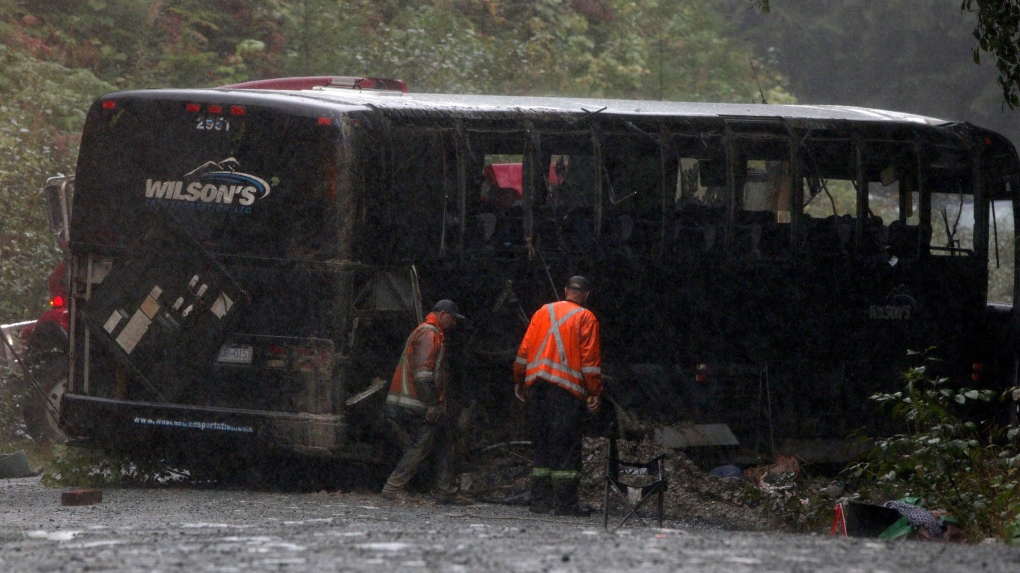 Search and rescue crews and RCMP help a tow-truck crew to remove a bus from the ditch of a logging road near Bamfield, B.C., on Saturday, September 14, 2019. THE CANADIAN PRESS/Chad Hipolito

B.C. Premier John Horgan is planning to meet with Bamfield First Nations in the wake of a deadly bus crash that claimed the lives of two University of Victoria students on Friday.

Horgan said Thursday that he will meet with the leaders of the Huu-ay-aht First Nations on Tuesday, Sept. 24, when they are likely to discuss long sought-after road upgrades in the area.

Emma Machado of Winnipeg and John Geerdes from Iowa, who were both 18 years old, were killed when their charter bus with 43 other UVic students on board left a gravel road and landed down an embankment.

The road the bus was travelling on when it slid down an embankment is a privately owned logging road, but it is also the primary access road for the Huu-ay-aht First Nations and the Bamfield Marine Sciences Centre, where the bus was headed.

Huu-ay-aht Chief Robert Dennis told CTV News Vancouver Island the nation has been pushing for upgrades to the gravel road for years.

B.C.’s Forest Safety Ombudsman called on the province to upgrade Bamfield Main logging road in 2008, saying the road has become far more useful to the community than when it was first built for logging trucks.

Trips to Bamfield centre to continue

For its part, the University of Victoria says it has no plans to cancel a student trip to the marine centre scheduled for next month.

"The Bamfield Sciences Marine Centre [sic] is a world-class teaching and research facility that provides our students with incredible opportunities to learn and study on the West Coast," said UVic vice-president of finance and operations Gayle Gorrill.

"The only other UVic trip this term is in late October and there are no plans to cancel it."

The university is currently undergoing a review of the bus crash and says it will use findings of the review to plan future visits to the marine science centre.

Gorrill says its first priority after the crash was responding to the needs of students and their families, but the university did begin to look into the circumstances around the bus accident earlier this week.

The RCMP said Wednesday that the cause of the crash remains under investigation and Transport Canada is assisting in the probe.