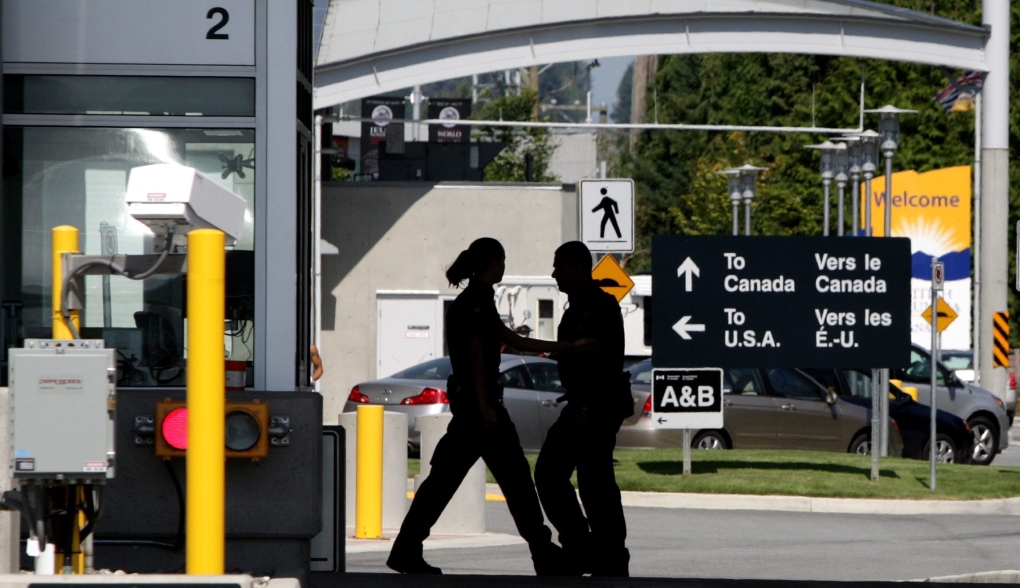 Canadian border guards are silhouetted as they replace each other at an inspection booth at the Douglas border crossing on the Canada-USA border in Surrey, B.C., on Thursday August 20, 2009. One year after pot became legal in Canada, it's still a tricky issue to cross the U.S. border where marijuana is not legal federally. (THE CANADIAN PRESS/Darryl Dyck)

VICTORIA - Canadians wanting to cross the U.S. border are being asked different marijuana questions than they were before cannabis was legal, says an American immigration lawyer who represents numerous aging baby boomers denied entry to America for past pot use.

Recreational marijuana will have been legal for a year on Thursday, but any celebrating still stops at the U.S. border, said Len Saunders, a Canadian-born lawyer based in Blaine, Wash.

“They are not asking questions of recent use because they know they can't deny the person because it's legal in Canada,” he said. Instead, he said they're asking Canadians if they have ever smoked marijuana and that's what's been keeping him busy.

A spokesperson for the U.S. Customs and Border Protection Office was not available for comment, but an official emailed a statement dated September 2018 that said U.S. laws will not change after Canada's legalization of marijuana.

The statement said even though medical and recreational marijuana is legal in some U.S. states and Canada, marijuana is not legal under U.S. federal law which supersedes those laws.

“Consequently, crossing the border or arriving at a U.S. port of entry in violation of this law may result in denied admission, seizure, fines, and apprehension,” said the statement.

Border officials are currently compiling data about the number of Canadians stopped at U.S. crossings since marijuana legalization in Canada, but the figures are not available, the statement said.

Saunders said he has noticed over the past year an increase in Canadians in their 50s and 60s wanting his services after being denied entry to the United States because of admitted marijuana use.

“It's prior to legalization and they admit to it, then it's still grounds to inadmissibility,” he said. “They say, 'I did it back in the 70s, hippie stuff.' ”

Barry Rough, a resident of Langley, B.C., said he received a lifetime ban from the U.S. last August after he told border officials that he last smoked marijuana 18 years ago.

Rough, 61, said he was travelling to Emerson, Wash., to offer addictions counselling to an Indigenous group but border officials denied his entry to the U.S.

“They asked me if I'd ever done drugs and I just told the truth,” he said. “I didn't want to lie, so I told them, 'Yes, I smoked marijuana 18 years ago.' Four hours later, I was escorted across the border after I was fingerprinted, frisked, pictures taken and asked 1,000 questions, the same question every time.”

Rough said he hired Saunders to help him apply for a waiver to enter the United States. His family has vacation property in Palm Springs, Calif., and he wants to visit later this year.

He estimated the waiver process will cost him about US$2,000. The cost includes legal fees, criminal record checks and he is expected to write a letter of remorse for smoking marijuana in the past.

Rough warned other Canadians could face the same circumstances.

“If you say you have tried it you are risking going through the same process I went through,” Rough said.

Saunders said hiring him is not a guarantee that Canadians will be allowed back into the United States.

The waiver process can take up to one year to complete and is not permanent, meaning people often must reapply, he said.

Toronto immigration lawyer Joel Sandaluk said he hasn't seen many cases where people have been denied access to the U.S. on grounds of marijuana use.

“People are often not asked, have they smoked marijuana before?” he said. “The advice we give our clients is always to be as honest with officers as they possibly can be. If I was in the back seat of your car whispering advice in your ear, I'd probably say at that point, I'd rather not answer that question and ask if you can withdraw your application for admission.”

“One of the things you have to remember about border officers, Canadian as well as American, is they have vast discretion when it comes to who they stop, who they search and how they examine,” he said.

Canada Border Services Agency said in an email statement it has developed awareness tools to inform travellers of the continued prohibition of the cross-border movement of marijuana.

This report by the Canadian Press was first published Oct. 16, 2019.