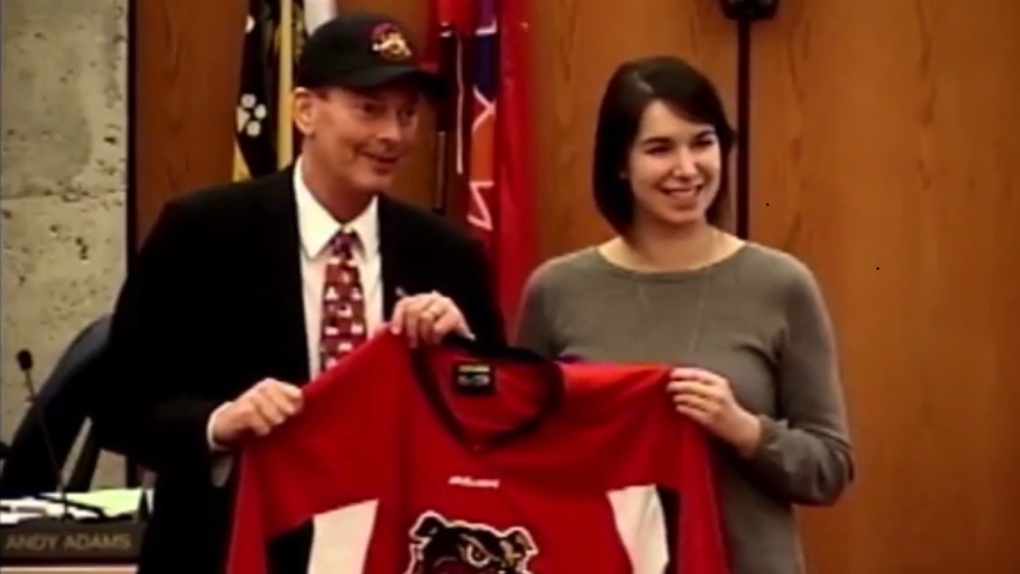 Port Alberni Mayor Sharie Minions (right) presents an Alberni Bulldogs jersey to Campbell River Mayor Andy Adams (left) as thanks for the community's help with hosting the team while Port Alberni's rink was closed due to an ammonia leak: (CTV News)

CAMPBELL RIVER -- The Mayor of Port Alberni travelled to Campbell River Monday to personally deliver a thank-you from one community to another.

Mayor Sharie Minions appeared before her Campbell River counterparts to thank the community for its assistance while her city's ice arena was shut down after an ammonia leak last month.

"[This jersey is] to extend our community's most sincere thanks to the City of Campbell River, the Regional District, all of the staff and really the people of this area who came out to support us," Minions said.

Campbell River hosted an Alberni Bulldogs hockey game as well as some practices while Alberni's rink was closed for weeks.

"We want to come and say thank-you very much for helping us at a time that was very challenging for our community," said Minions.

Minions said Port Alberni realized the importance of an arena to a community when it was shut down for close to three weeks, calling it a huge loss.

She presented a Bulldogs jersey to Mayor Andy Adams who also serves as the chair of the Strathcona Gardens Commission.

Adams added that it was great to have an immediate response from hockey fans as well as the owners of the Bulldogs. He says that all 1,000 tickets that had been printed for the game were gone 20 minutes before the puck dropped.

"We have some rabid fans, we knew they would be anxious to host a game," Adams said.