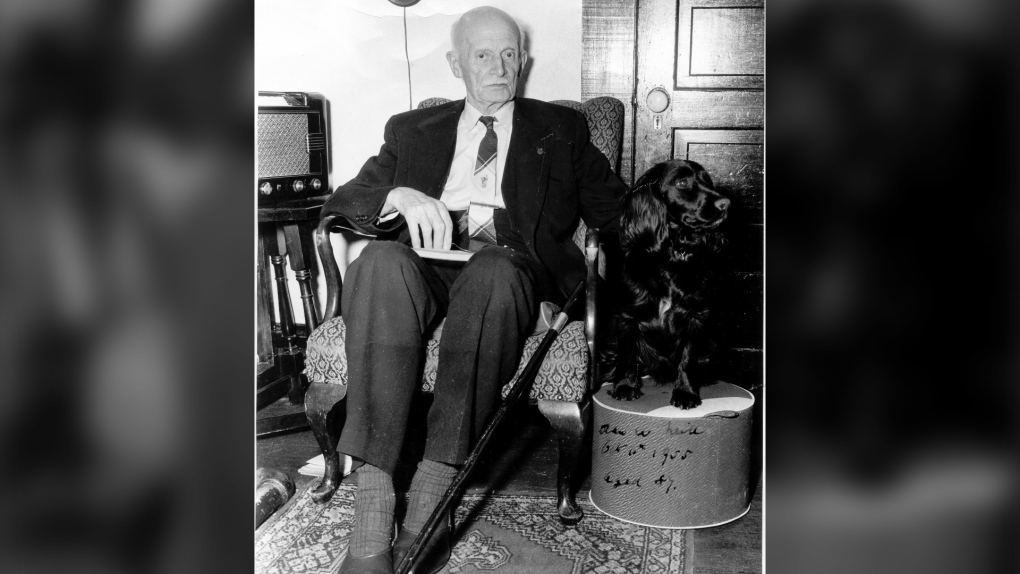 Former federal and provincial politician Alan Webster Neill sits with his dog in a photo from 1955 at the age of 87. (THE CANADIAN PRESS/HO-Alberni Valley Museum Photograph PN1247)

VICTORIA -- A Vancouver Island school district is embarking on what could be a difficult exercise to rename an elementary school named after a long-serving, controversial former municipal, provincial and federal politician.

The Alberni School District in Port Alberni, B.C., is setting the stage for a public consultation to rename A.W. Neill Elementary School, named for Alan Webster Neill, a former mayor, member of the B.C. legislature and a federal MP who represented the area in the House of Commons from 1921 to 1945.

Neill, known as and advocate for a blue-collar workers, an early backer of the Canada Pension Plan and a supporter of unemployment insurance, was also considered racist for his efforts in the House of Commons to deny voting rights to Asian immigrants, his support of anti-Chinese laws in the B.C. legislature and his approval of Indigenous residential schools.

Neill's own home in Port Alberni included a restriction that it could never be sold to Asian people. He died in 1960 at 91. The home's covenant was removed earlier this year.

“In my opinion, his behaviour and his beliefs were so heinous that he doesn't deserve a spot on a main plaque on any public building,” said Rosemarie Buchanan, a school board trustee who spearheaded a failed 2017 attempt to have the city council drop the name of Neill Street.

“To think we were sending children to a school named after somebody who was an Indian Agent, who believed the residential school system was good for kids,” she said. “He said the Japanese people were a cancer.”

The district's school board said in a statement last month it is considering a name change for the school.

“In the Alberni Valley, much discussion has taken place about the values and actions of A.W. Neill and whether or not A.W. Neill Elementary School should continue to bear this individual's name,” said school board chairwoman Pam Craig.

Prof. Reuben Rose-Redwood, a social and cultural geography expert at University of Victoria, said there is a long, worldwide history of renaming places, including cities, streets and public squares. He cited the Soviet Union as an example of a country that underwent extensive name changes.

Victoria's council approved the removal of a statue of John A. Macdonald, Canada's first prime minister, from the front entrance at city hall earlier this year.

“It speaks to what do we in the present hold as our values of who we choose to honour from the past,” he said. “How can we constructively engage with the past in the present to create a better future.”

He said the debate about to unfold in Port Alberni is healthy.

“We often learn our history, not by having monuments there, but by the debates that arise from people who suggest we should remove monuments.”

The Port Alberni school board will decide by next spring whether to make the name change, said Craig, adding the board is looking for public input.

Buchanan said she knows that people don't like change.

“Some people have said to me, 'that was just the way that was at that time.' There is no get out of jail free card because it was said so many years ago. It is still incredibly racist.”

“I can tell you it isn't going to be an easy conversation because it isn't just the name,” said Ruttan, who was mayor when the council rejected a name change for Neill Street. “Without a doubt, A.W. Neill was racist, but also, we have to think about that time. It was a very racist time and there were what people perceived as a lot of threats to the economy, a lot of threats to safety and all that kind of stuff.”

Neill was the MP during the Great Depression, the years of the Second World War and the growth of residential schools.

Ruttan, a retired school principal, said he went to A.W. Neill school as a youngster. He said he did not know about Neill's history while growing up in Port Alberni.

“It's going to be a really interesting community discussion and ultimately the decision, as I understand it, will be made by the school board,” Ruttan said. “Kudos to them if they can work through this decision without alienating people in the larger community.”

Prof. Ian Baird, a geography expert at University of Wisconsin-Madison, said Neill's views were strong even for the time period.

“Even for his day and age, and I think this is the very important thing to recognize, he was one of the most racist politicians around,” said Baird. “He was fundamentally against all Asians from the first moment he entered politics. Asians were seen as an economic threat to white people, or at least to him.”

Baird, who owns property in the Port Alberni area, said changing the name of the school is up to the people of Port Alberni, but “it doesn't seem to me he's worthy of an honorific.”

This report by The Canadian Press was first published Dec. 18, 2019.