VICTORIA -- The Office of the Police Complaint Commissioner says it is reviewing an incident Wednesday that saw a Victoria police car run a red light and strike a civilian vehicle in a busy downtown intersection.

A dashcam video of the incident provided to CTV News shows the police car travelling northbound on Douglas Street and proceeding against the legal flow of traffic through the intersection with Johnson Street.

The police car does not appear to have lights or sirens activated as it enters the intersection and strikes an SUV, pushing the vehicle up onto the sidewalk where a pedestrian runs out of the way to avoid the vehicle.

On Thursday, British Columbia's independent police watchdog confirmed it is reviewing the crash, saying it was notified of the incident by Victoria police. 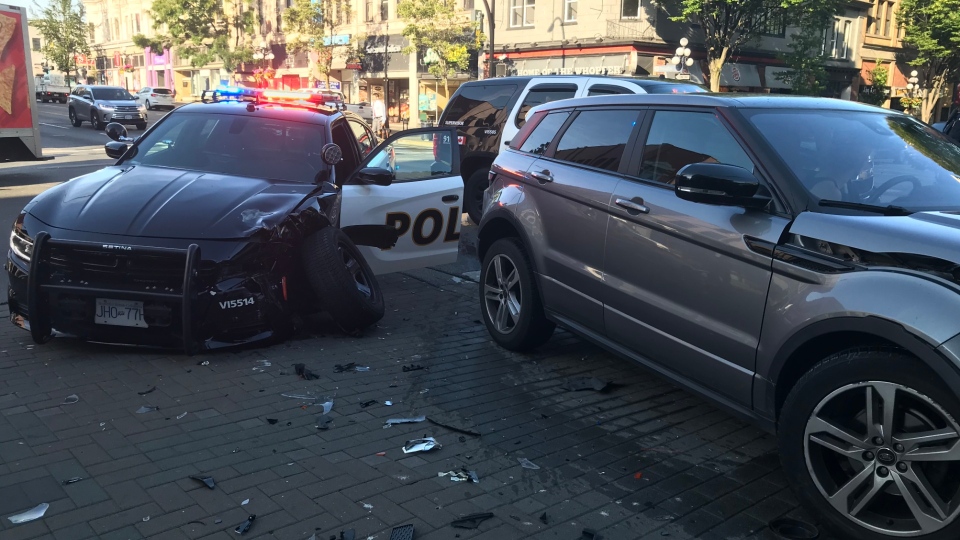 "We are currently in the process of reviewing the materials provided by the Victoria PD and any results from their collision investigation before making a final determination," said the OPCC's deputy commissioner Andrea Spindler.

The male officer in the police cruiser quickly exited the vehicle after the collision and immediately checked on the woman driving the SUV.

The police cruiser and the SUV both appeared significantly damaged in the crash.

Police said no injuries were reported in the collision.