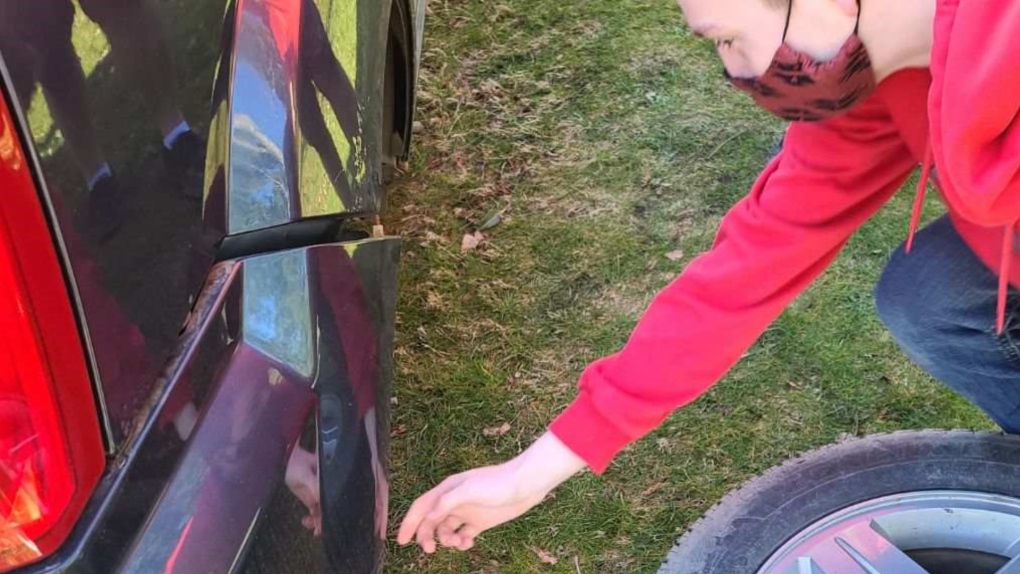 Police say the young driver called his father who helped him put the tire back on the car safely: (Ethan Perpeluk)

VICTORIA -- Nanaimo RCMP are investigating after a tire came free of a moving vehicle on Wednesday afternoon.

Mounties say that the vehicle likely had the lug nuts on one of its rear tires loosened while it was parked in the parking lot next to the Serauxmen baseball stadium between 8:10 a.m. and 12:10 p.m.

When the young driver of the vehicle, a blue 2008 Dodge Caliber, returned to his car just after noon he said he noticed a "strong vibration" coming from his rear passenger-side tire about eight minutes into driving.

He then decided to pull over to the side of the road near Bowen Park, at which point the rear tire came loose and rolled "almost 200 metres" through the park. It eventually came to a rest inside the park's tennis courts while the driver "watched in shock," say police.

The driver, described as a youth, then called his father who helped him put the tire back on the car safely.

Shortly after the incident took place, the young driver told his friends what had happened. Police say a second driver, 17, then decided to check his car which was parked just three stalls down from the first vehicle around the same time.

"Sure enough, the nuts on his rear passenger tire had been loosened," said Nanaimo RCMP in a release Friday. "He secured them, and safely drove off."

Police are now investigating and are asking anyone with information to come forward.

"These were extremely dangerous and malicious acts of vandalism that could have had tragic consequences," said Const. Gary O'Brien of the Nanaimo RCMP.

Anyone with information on the incident, or who may have had their lug nuts loosened as well, is asked to call Nanaimo RCMP at 250-754-2345.