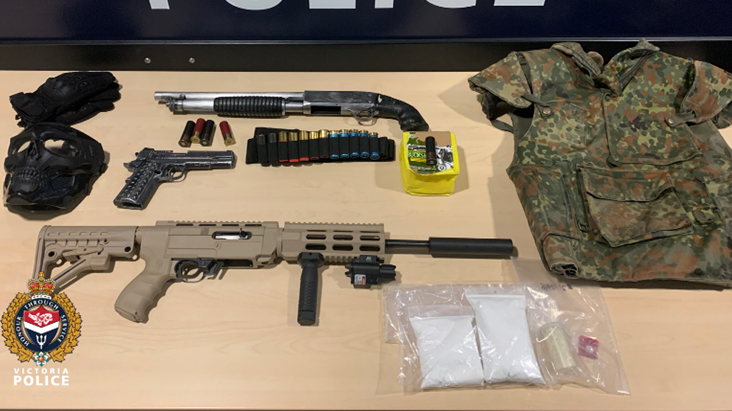 Some of the items seized by police, including three guns and body armour, are shown: (Victoria Police)

VICTORIA -- Victoria police say a man was arrested and several guns were seized at a supportive housing facility near downtown Victoria on Saturday.

The arrest took place around 4 p.m. when officers with VicPD and the Greater Victoria Emergency Response Team executed a search warrant at a suite in a supportive housing facility in the 700-block of Queens Avenue.

During the search, police found a man who was wanted for possession of drugs for the purpose of trafficking, and three firearms, one of which was loaded.

The three guns included a .22 calibre rifle with a drum magazine, a .22 calibre handgun and a sawed-off 12-gauge shotgun, which was loaded, according to police.

Officers also found body armour, armoured gloves, a bandolier and a mask shaped like a skull inside of the suite. All of the items were seized, as well as an unspecified amount of drugs, say police.