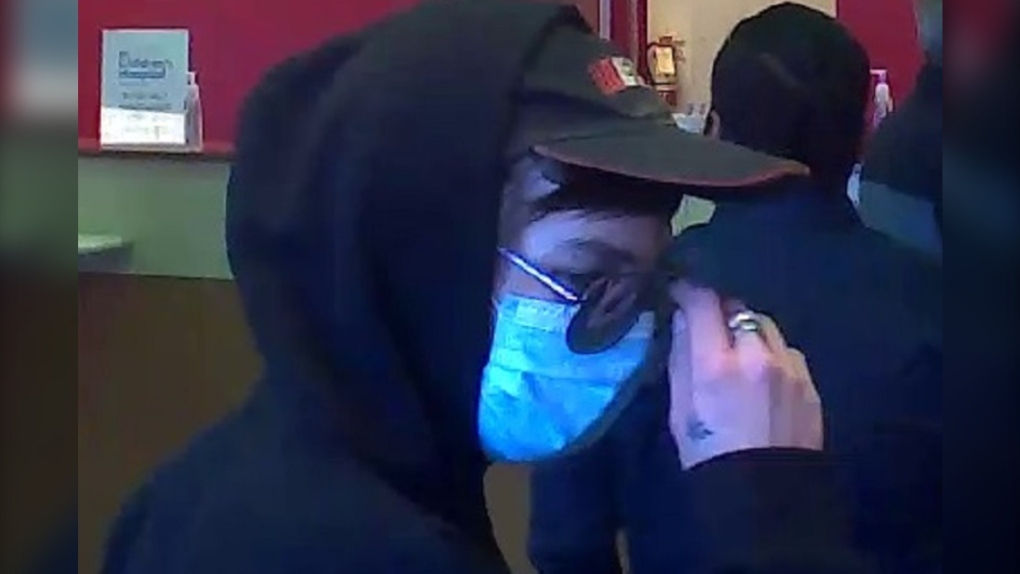 Police released two photos of the suspect, including this one showing his rings and thumb tattoo. (Oceanside RCMP)

Mounties on the Mid-Island are asking the public for help identifying a man suspected of robbing a bank in Parksville last week.

Officers from the Oceanside RCMP detachment, which serves Parksville and several other communities north of Nanaimo, were called to the CIBC branch at 130 Island Highway West around 3 p.m. on Thursday.

The robbery had occurred roughly 10 minutes before police arrived, according to a news release.

Police said a man entered the bank and demanded cash, then fled on foot toward Alberni Highway and then west in the alley behind the branch.

"Oceanside RCMP frontline and plainclothes officers as well as forensic identification services immediately attended the scene to investigate," police said in their statement.

"The suspect was not located."

Police describe the suspect as a white man in his mid-20s. He stands 5'7" and has a slim build. At the time of the robbery, he was wearing blue or grey pants; a dark-coloured, hooded sweatshirt; a blue medical mask; reflective, aviator-style sunglasses; and a dark baseball cap.

Surveillance photos shared by Mounties show that the suspect's hat had an "ECHO outdoor power equipment" logo on it. He also had large, silver rings on his right middle finger and a small, dark tattoo at the base of his right thumb.

"If you recognize the person from the surveillance photos, have dash cam or any other video surveillance from the area around the time of the robbery, or have any other information about this offence, investigators would like to speak with you," said Sgt. Shane Worth in the news release.

Forty-six people were found dead in and near a tractor-trailer and 16 others were taken to hospitals in a presumed migrant smuggling attempt into the United States, officials in San Antonio said.

An Amtrak passenger train traveling from Los Angeles to Chicago struck a dump truck Monday in a remote area of Missouri, killing three people and injuring dozens more as rail cars tumbled off the tracks and landed on their sides, officials said.

As long lines persist, Canadians travelling in the next 24 to 48 hours are being given priority at some passport offices.