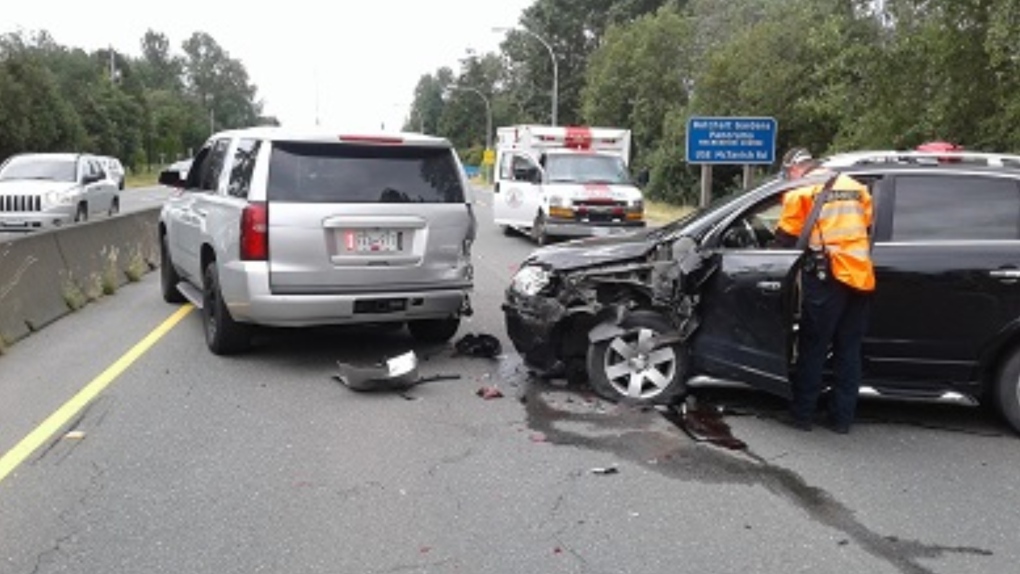 Mounties say the driver of the black vehicle was taken to hospital after colliding with the parked silver police SUV: (Sidney/North Saanich RCMP)

VICTORIA -- The Sidney/North Saanich RCMP are reminding drivers to keep an eye on the road after three crashes occurred on the Patricia Bay Highway on Tuesday.

Mounties say that an initial single-vehicle collision led to the next two crashes, which reportedly occurred due to drivers looking at previous crash scenes instead of the road.

The first crash occurred Tuesday morning on a southbound stretch of the highway.

Police say that a Sidney/North Saanich RCMP officer attended to the crash and blocked off a section of the highway with their police vehicle, which had its emergency lights on, to secure the scene.

Mounties say that traffic was flowing around the police vehicle without issue until a black SUV collided with the stationary police vehicle.

“The flashing emergency lights, and a large silver police SUV parked in the road was obviously not enough of a deterrent for a driver who wanted to see what the police officers and emergency crews were doing,” said the Sidney/North Saanich RCMP in a release Friday.

The driver of the black SUV was then taken to hospital for treatment of injuries. The police vehicle was unoccupied at the time and no other injuries were reported.

Following this second crash, traffic in both directions of the Pat Bay highway slowed significantly.

Police say that at this time, a third crash occurred because a driver was allegedly looking at the previous crash scenes and was not watching the road.

Mounties say that a vehicle in a northbound lane crashed with another car that was travelling in the same direction. The collision was described as “minor” and both vehicles were fit to drive away from the scene.

“These collisions show how dangerous collision scenes are to first responders, not only from the smoke, debris, fluids and car parts, but other drivers on the road too,” said Cpl Chris Manseau, B.C. RCMP media relations officer.

“Fortunately, these after collisions did not hurt any first responders on the scene.”