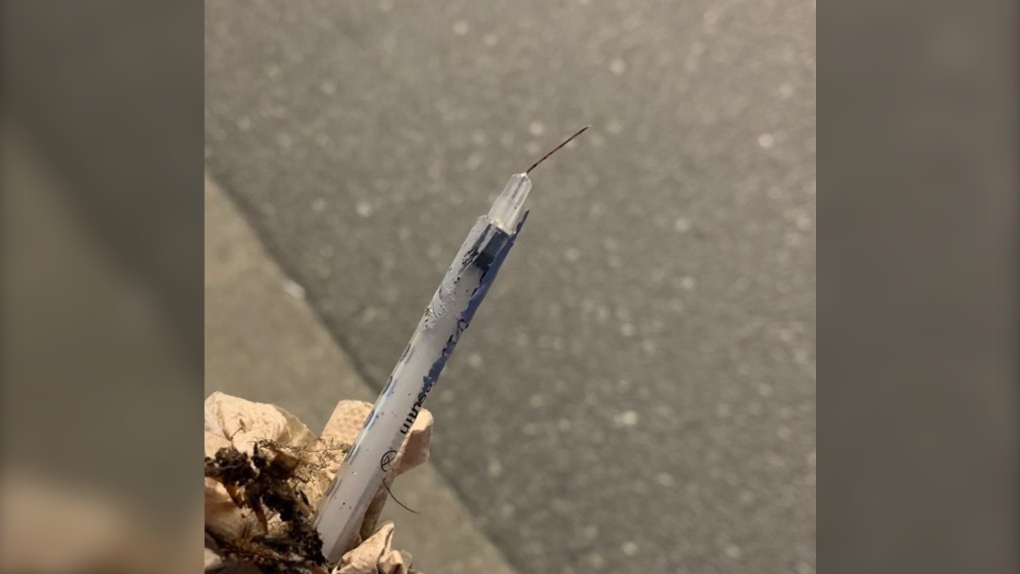 The needle that pricked a man in Beacon Hill Park is shown: (Victoria Police)

VICTORIA -- Victoria police are warning residents to be on the lookout after a man was pricked by a needle while walking in Beacon Hill Park this weekend.

The incident occurred around 8:30 p.m. Saturday just after the man had stepped off a chip trail in the park, near Douglas Street and Avalon Road.

Police say the man had felt a pain in his foot before noticing that he had been jabbed by the uncapped hypodermic needle.

The man then drove himself to a hospital and spoke with police about the incident.

On Friday, police also seized an unattended, uncapped needle and several knives from an area close to a downtown playground, where children were playing.

Police say they were called to Crystal Pool around 7 p.m. for reports of a man “shouting and acting erratically.”

When officers arrived, the man had already left the area. However, while at the scene, police spotted the uncapped needle as well as six knives.

The officers were concerned and seized the items, as they were just 30 feet away from a children’s playground and baseball diamond, where dozens of children were at the time.

Reports of accidental needle pricks appear to be on the rise in Victoria.

Last week, a City of Victoria worker was pricked by a needle while on the job. The incident marked the fourth time a city worker was jabbed by a needle this year, surpassing the three incidents that took place in all of 2019.

Meanwhile, a local landscaper has spoken up saying that she now refuses to work downtown after being accidently pricked by a needled.