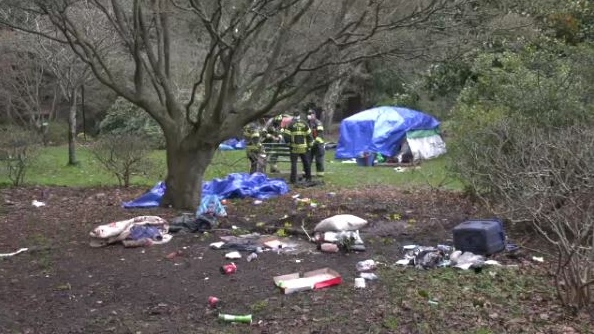 One person suffered minor injuries, according to the Victoria Fire Department: (CTV News)

VICTORIA -- Police are investigating after a damaging fire broke out in Victoria on Tuesday evening.

The suspicious fire, which engulfed an unoccupied tent, was reported just before 7:30 p.m.

When officers arrived at the blaze, located in the 500-block of Ellice Street, flames could be seen rising approximately 15 feet into the air and had spread to a nearby hydro pole and wires.

“We just received a report that there was a tent fire in the park here so we responded with a full compliment of two engine trucks, battalion chief, ladder vehicle (and) rescue truck,” said Victoria Fire Department deputy chief Dan Atkinson.

“It was reported as several exposures so we were worried about possible spread,” he said.

Firefighters doused the fire upon arrival. Atkinson says one person received minor injuries to their hands and damage was done to the hydro pole and a nearby business.