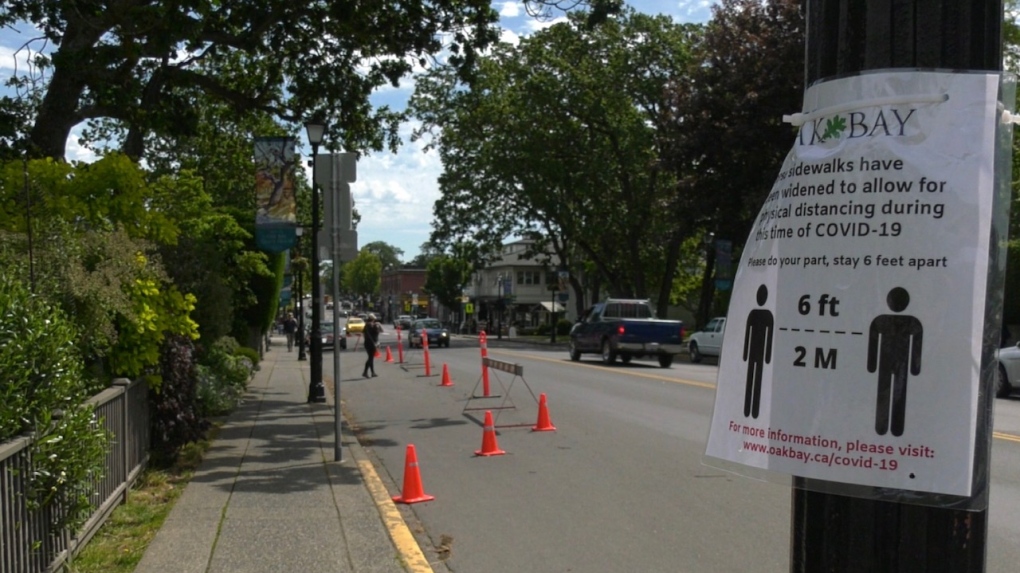 The Greater Victoria Placemaking Network wants municipalities to rethink their streetscapes, sidewalks and boulevards to better accommodate the safe movement of people and supporting the needs of businesses as the city reopens.

VICTORIA -- The Greater Victoria Placemaking Network wants municipalities to rethink their streetscapes, sidewalks and boulevards to better accommodate the safe movement of people and supporting the needs of businesses as the city reopens.

“Our communities are getting busier and people are wanting to get out and patronize shops and coffee shops and restaurants, but it just has to be done differently,” says Ray Straatsma, chair of the GVPN. “At the end of the day, it’s do we need space for empty vehicles or do we need safe space for safe health?”

The group says urban areas like Cook St Village, Quadra Village and Oak Bay Avenue, among others, could convert vehicle lanes or parking spaces adjacent to sidewalks into space for pedestrians or mobility devices.

"Many sidewalks are not wide enough for two people to safely pass, and in some places, line-ups squeeze out space even more,” says Straatsma.

Standing in the North Park Village area while doing an interview Friday, it was obvious pedestrians were struggling to get past line-ups forming outside businesses, and social distancing was next to impossible while navigating the busy sidewalks.

“It’s evident they need more outdoor space then they needed in the past, whether it’s for lineups to get into small shops or patio spaces or just for people to get around and move around the city safely and comfortably,” Straatsma said.

Several municipalities, including Victoria and Sidney, are looking at fast-tracking permits to give restaurants and retailers access to public spaces for patios.

There are other options to consider as well, says the GVPN, especially for active transportation and mobility.

“Public transit has suffered unprecedented drops in ridership. Many transit-riders will be reluctant to ride buses for some time and are seeking viable and affordable alternatives,” Straatsma says. “For many, a motor vehicle is simply not an option. All municipalities in the CRD can do more to create shared and slower streets, and better bicycle facilities to make walking and biking safer and more attractive.”

Some other examples the GVPN says should be considered are:

Many cities around the world are adopting new measures to address the issues created by COVID-19 and the safe movement of people. Places like Seattle, Surrey, Port Townsend and Vancouver are showing leadership with street redesigns and reallocations, according to the placemaking network.

It’s a challenge Straatsma says his organization wants to help tackle alongside municipalities and businesses to help find creative solutions so everybody wins.

To find out more about the Greater Victoria Placemaking Network, visit the group’s website.