A Saanich woman is calling out what she says is a double standard for pets after her dog was mauled by a “vicious” cat.

Javiera Rodriguez was walking with a group of seven dogs, including her pit bull Bandita, and their owners near Mount Tolmie Monday night.

“When we were coming back this woman was gardening, and her cat came out of the bushes and started attacking the dogs,” she said. “It specifically went after Bandita and latched onto her face, and the woman didn’t do anything to stop her cat and was just screaming.”

Kyla Grover was also on the walk with her dog and described the persistent cat as “terrifying.”

As the cat went at the group of dogs, she said she realized she had to get between them before something worse happened.

“After quite a while of the cat going at Bandita’s face, latching onto her face, kicking her with its back legs, biting her face…Bandita finally started to stick up for herself and I just knew I had to separate them,” she said.

She managed to pry the cat off of Bandita, suffering bites and scratches on her hand in the process. 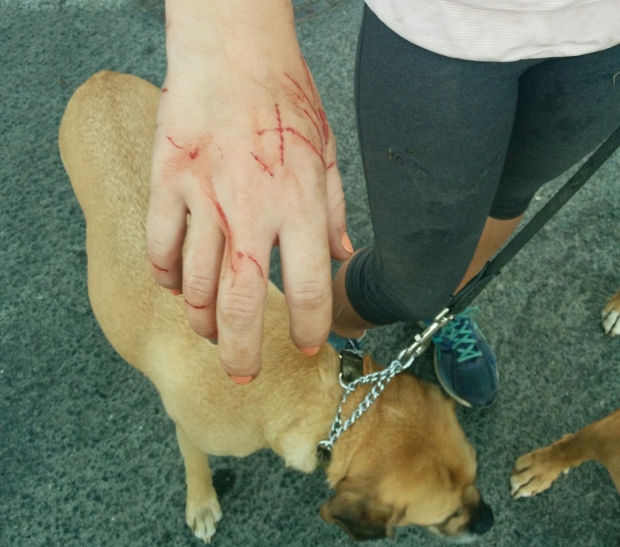 “I’m just proud of the dogs,” she said. “Bandita, all she did was grab that loose skin, that scruff they have on the back of their neck and held on to it just to get the cat to stop. She wasn’t shaking it, she wasn’t biting down or anything.”

With multiple bloody scratches on her face, Bandita was taken to the Central Victoria Veterinary Hospital for treatment and was given antibiotics.

But Rodriguez said she was surprised that when she called Saanich to report the attack, she was told the municipality doesn’t have a cat bylaw.

Saanich’s animal bylaws include an extensive section pertaining to dogs, such as restrictions for “dangerous and aggressive” dogs, license fees and dog tags. No such bylaws exist for cats.

She said if things were reversed, and her dog attacked the cat, it would’ve been a very different outcome.

“I think there is a huge double standard here. Bandita could’ve killed that cat, but she didn’t even hurt it a bit,” she said. “I think cats should go by the same rules as any other pets here in Victoria so we can keep everyone safe and controlled.”

The cat’s owner reportedly apologized to Rodriguez and paid for her vet bill.

The Saanich Pound could not be reached for comment.