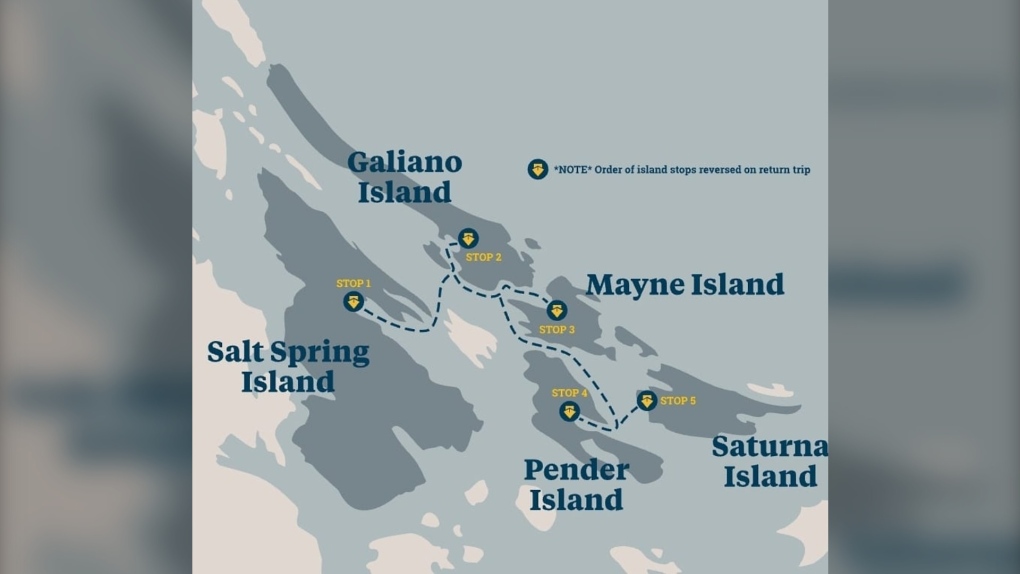 A map of the AquaLink water taxi route is seen in this image from the project's Facebook page.
Vancouver -

Travellers to the Southern Gulf Islands will have an extra option for getting around this September, thanks to a new water taxi service called AquaLink.

The pilot project will run on Saturdays and Sundays through the month of September, giving people visiting one of the islands the opportunity to easily hop to another one.

Trips are scheduled to depart from Ganges Harbour on Salt Spring Island twice a day, at 8 a.m. and at 4 p.m.

From there, a small passenger vessel - with a capacity of either 11 or 45 people, depending on demand - will travel to Montague Harbour on Galiano Island, Miners Bay on Mayne Island, Port Browning on Pender Island and Lyall Harbour on Saturna Island, reversing the stops on a return trip and arriving back at Ganges Harbour at 12:35 p.m. and 8:35 p.m. each day.

"We have done our best to make sure that AquaLink stops at the hub of each island so that you have access to the most activities and amenities without the need of a vehicle," AquaLink says in an FAQ on its website.

The Southern Gulf Islands Tourism Partnership is funding the pilot project, which will only be running during the month of September, though the project's website suggests October dates may be added as well.

Tickets range in price from $10 to $20, depending on the distance travelled, according to AquaLink.

More information on the project is available on its website.

Liberal Leader Justin Trudeau has held on to power at a pivotal time in the pandemic, clinching another minority government in the 2021 federal election that looks much like the one Canadians elected in 2019. CTV News' Decision Desk declared the Liberal minority win after polls closed across the country in a federal election like no other.

The Conservative Party has come up short, failing to dethrone the now three-term Liberal Party. CTV News' Decision Desk declared the Liberal minority win after polls closed across the country.

Here's what Trudeau's Liberals have promised for their third term

Liberal Leader Justin Trudeau and his party have won a minority government on a platform of promises that included billions of dollars in new spending to rebuild the country from the COVID-19 pandemic.

Follow the CTVNews.ca live blog for real-time updates, analysis and 2021 federal election results as they come in. We will also feature updates from the headquarters of every major federal party, as well as dispatches from CTV News reporters in ridings across different parts of the country.

People's Party of Canada Leader Maxime Bernier has failed to win back his old seat in Beauce, Que., but his party looks to increase its popular vote.

With about 1 million voters sending in their 2021 ballots by mail, Canadians may have to wait longer than usual to find out who will form the next government.

Did you choose to leave a polling station amid long lines? We want to hear from you

If you left a polling station on election night amid long lines, CTVNews.ca would like to hear from you.