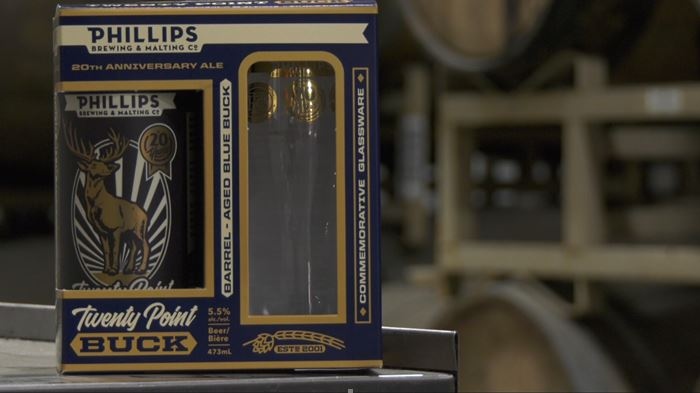 Phillips staff say the 20 Point Buck 20th Anniversary Ale is a representation of the more than 300 different beers brewed by the craft brewery in the company’s 20-year history. They say the limited-edition ale incorporates key elements of the Phillips Brewing process: onsite malting of Vancouver Island grown barley and the creative brewing of quality beers.

The 20 Point Buck uses a malt that was developed in-house by the Phillips maltsters. Once the brewer’s well known Blue Buck is brewed with the malt, it is transferred to whiskey barrels from the company’s distilling program and aged for 20 months.

“You’re going to get a real depth of flavour in this beer,” said Lockhart. “There is some subtle toffee flavour and a vanilla character that comes from the wood of the barrel as it is aged for 20 months and it finishes with a nice warmth like Blue Buck is giving you a hug.”

Phillips Brewing is named after its founder, Matt Phillips. Phillips started the company in the summer of 2001 after years dreaming of setting up an artisan brewery.

After developing his business plan for creating unique craft beers, he spoke with a number of financial institutions looking for a loan, only to be turned down. With nowhere else to turn, the ambitious 27-year-old entrepreneur financed Phillips Brewing on credit cards. Now 20 years later, the company has more than 25 craft beers in its portfolio.

“When you think of Phillips Brewing, you think of quality beer,” said Lockhart. “Matt (Phillips) from day one has invested in quality and the other piece is creativity. It’s sort of in our DNA here and it’s always something we will explore as beer continues to evolve.”

A little more than 3,000 tall cans of limited-edition 20 Point Buck were produced at the brewery’s Government Street location. Each can of the barrel-aged beer is packaged in a boxed set that includes a commemorative Phillips 20th Anniversary beer glass.

“It’s a really big thank you to Victoria and the community that has supported us for the past 20 years,” said Lockhart. “Phillips Brewing and all of the people who work here wouldn’t be here without the support of the community.”

Beginning on Sept. 2, the 20 Point Buck box sets will be available for a limited time only at the Phillips beer shop in Victoria. The limited-edition beer will also be available while quantities last at select craft liquor stores in British Columbia and Alberta.