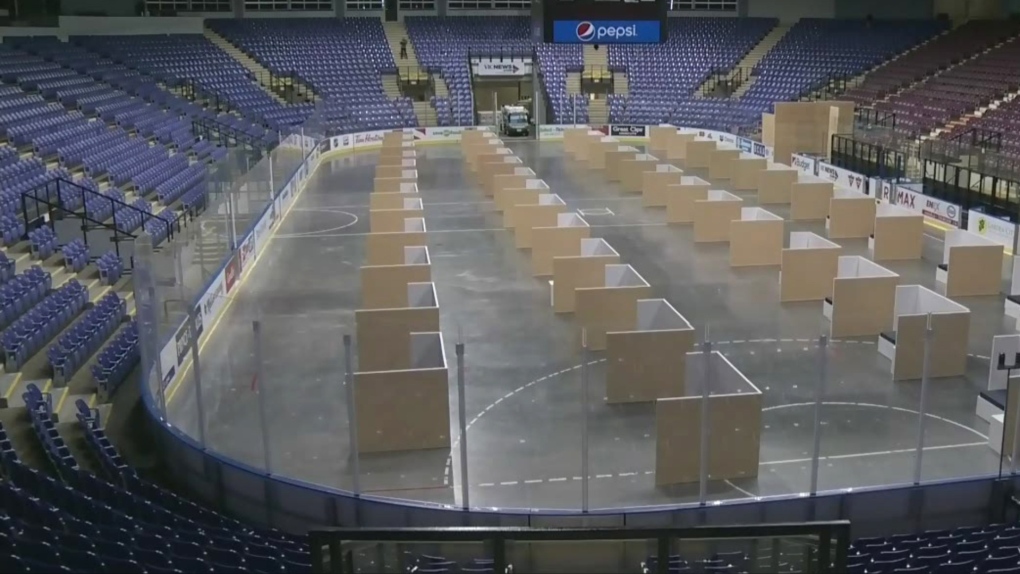 The arena is currently equipped with individual pods to help shelter-goers to self-isolate during the COVID-19 pandemic.

VICTORIA -- People living in Victoria's Save-On-Foods Memorial Centre after it was converted into a temporary homeless shelter will be given permanent housing by the end of August, according to the B.C. government.

BC Housing says staff from the PHS Community Services Society have been working with clients at the arena to understand their needs and to help them find adequate housing.

"We've got a tremendous amount of housing resources here in the CRD," said Heidi Hartman, BC Housing director of operations for Vancouver Island.

"Our goal is to match people to the supportive housing that's going to best meet their needs."

The arena was converted into a temporary housing shelter for approximately 45 people from the city’s homeless encampments in Topaz Park and along Pandora Avenue back in May.

The arena floor was prepared with individual pods to help shelter-goers self-isolate in privacy during the novel coronavirus pandemic. The province says it has never used the pods before but so far, they have been a great success.

BC Housing worked with the PHS Community Services Society and GSL Properties, the developer and operator of the arena, to establish the temporary shelter.

"BC Housing can't do their work without partnerships," said Hartman.

"Whether its partners providing space or non-profits providing the people-power to be able to support our individuals, and also the help of authorities providing supports that we need," she said.

The PHS Community Services Society says that, despite some reservations, the shelter at the arena has so far been successful.

"A lot of people seemed, like, nervous about using a hockey arena," said Avery Taylor, senior manager of housing for the PHS Community Services Society.

"I think it's actually worked out incredibly well and we're really, really proud of how well it's been," he said.