Pedestrian hospitalized after crash in Saanich 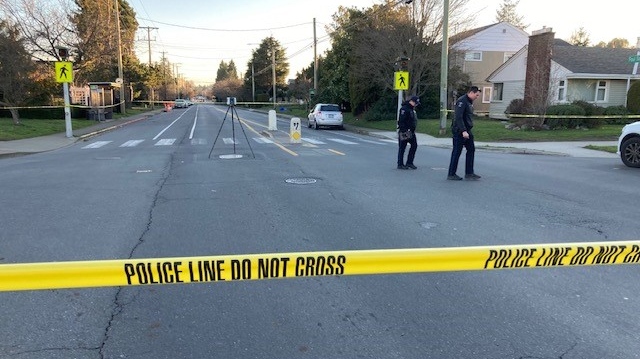 Police believe the position of the sun may have played a role in the crash: (CTV News)

Saanich police say a woman was taken to hospital Thursday after being struck by a vehicle at a marked intersection.

The crash occurred at the intersection of Foul Bay Road and Haultain Street shortly before 2 p.m.

Police say a vehicle was heading southbound on Foul Bay Road when two joggers were running across a marked crosswalk.

The vehicle struck one runner, a woman, who was taken to hospital for treatment of non-life-threatening injuries.

Police say the position of the sun may have been a factor in the crash.

The road was closed Thursday afternoon but is expected to reopen early Thursday evening.

DEVELOPING | 'Too many children did not make it home': Anniversary of discovery at Canada's largest residential school

A daylong memorial is underway Monday in Kamloops, B.C., at the site of what was once Canada's largest residential school on the one-year anniversary of the announcement of the detection of unmarked graves.

The death toll related to the powerful storm that swept Ontario and Quebec on Saturday has reached 10.

Is my home or car covered from storm damage? In most cases yes, insurance bureau says

As residents in Ontario and Quebec work to repair the damage caused by a severe storm over the weekend, many may be wondering whether their homes and cars are covered from any damages. The Insurance Bureau of Canada says wind damage is usually covered, but to confirm with their provider what losses may be included.

A captured Russian soldier who pleaded guilty to killing a civilian was sentenced by a Ukrainian court Monday to life in prison -- the maximum -- amid signs the Kremlin may, in turn, put on trial some of the fighters who surrendered at Mariupol's steelworks.

The first of three charter flights bringing Ukrainian refugees fleeing Russia's invasion to Canada is to land in Manitoba this afternoon.

The Canadian royal visit took place at a time when many are starting to view Prince Charles differently, given that his destiny to be King seems to loom closer, Richard Berthelsen writes in his exclusive column for CTVNews.ca.

An email encouraging members of the Canadian Armed Forces to consider contacting Habitat for Humanity if they can't find affordable housing is casting a spotlight on a growing challenge facing many military personnel and their families.