Pawless raccoons in Oak Bay could be result of leg traps: police 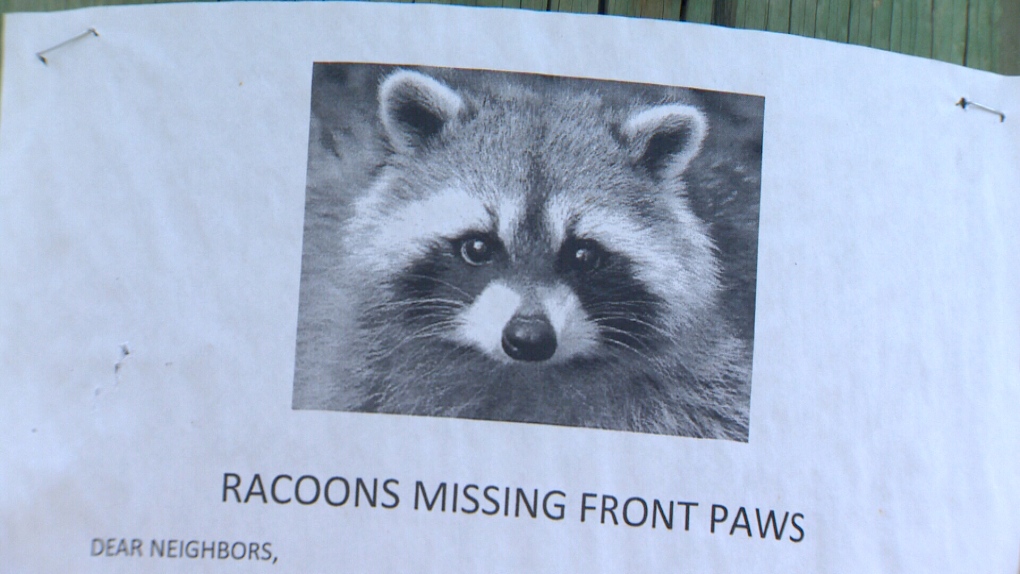 Residents of an Oak Bay neighbourhood say someone has been placing out leg-hold traps that have caused some raccoons to lose their paws. May 31, 2016. (CTV Vancouver Island)

Reports of a number of raccoons missing paws in Oak Bay has police warning of possible leg-hold traps in the area.

There have been up to four sightings of the injured animals around Haultain Street over the last few weeks.

“We had a report in central Oak Bay of a perceived decline in the racoon population and we’ve got one photo of a racoon that’s missing its front paw,” said Sgt. Chris Goudie.

One of the raccoons missing a paw was reportedly a nursing mother, according to police.

Police haven’t confirmed, but residents have put up posters warning it’s the result of someone placing traps.

“We are concerned for area children and of course people’s pets, because anybody or any animal can be caught in these leg-hold traps, and it can be rather nasty,” Goudie said.

He had one message to anyone who might be setting out the traps.

“Don’t use it,” he said. “If you’re not a licensed trapper, you have no right to put out leg-hold traps.”

He said anyone caught placing the traps could face cruelty charges and charges under the B.C. Wildlife Act.

It comes just nearly two weeks after a Canada goose was severely injured in a similar trap at a Surrey golf course.

The bird suffered lacerations and was taken in by a wildlife rescue group but later died.

Animal activists used the incident to call for a ban on the “cruel” traps.

Leg-hold traps are legal in B.C., but six municipalities have moved to regulate trapping in their jurisdictions. They’re all awaiting authority from the provincial government.