Parksville park closes after fire breaks out at homeless encampment 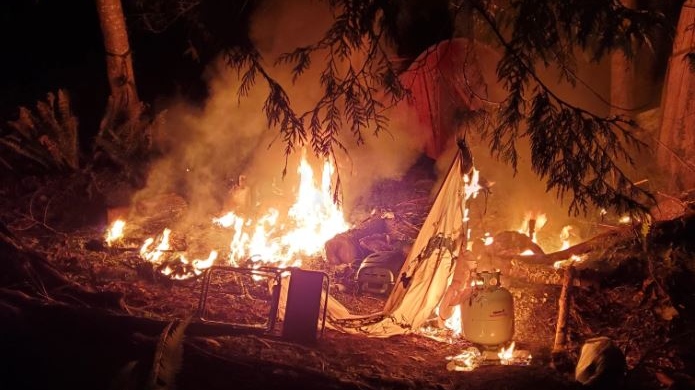 The park will remain closed until the city can complete a hazard assessment: (Parksville Fire Rescue)

VICTORIA -- An early morning fire at a homeless encampment at a regional park in Parksville has forced the city to temporarily close the area for safety reasons.

The fire broke out Thursday morning at Mark’s Nature Park. Parksville Fire Rescue says it was able to put out the blaze rather quickly, however, relatively extensive damage was done around the homeless camp where the fire first broke out.

City officials have since brought in heavy equipment to dismantle the encampment.

The park will be closed until the city can do a hazard assessment of the area and signage has been put up notifying the public of the closure.

Officials say that dying western redwood cedar trees that are in the park may have been affected by the fire as well.

"We don’t know how much damage was done to those trees," said Parksville Mayor Ed Mayne. "We don’t want people in the park until we’ve had a chance to evaluate it."

Another reason the park is closed is because a significant windstorm is expected to hit the region later this week.

Parksville Fire Rescue says no one was injured and the fire was likely caused by a propane device.

However, the cause of the fire is still under investigation.