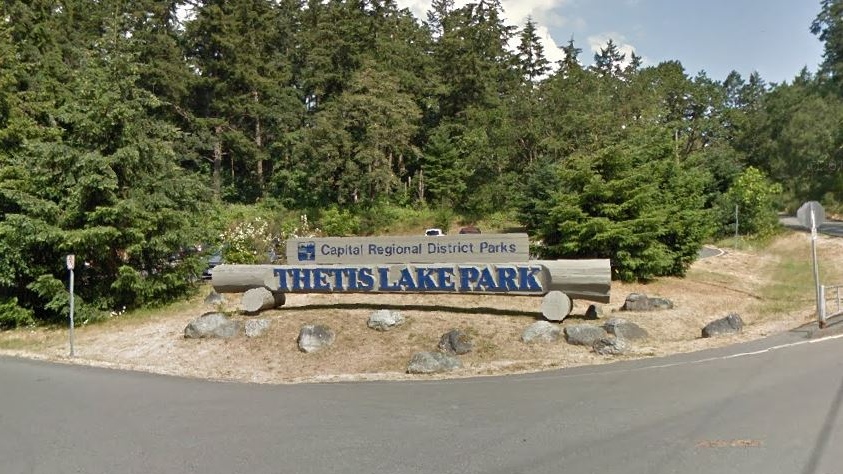 The entrance to Thetis Lake Park in View Royal is shown. (Google Maps)

A man and woman are in custody after West Shore RCMP responded Thursday morning to reports of a female with a handgun at Thetis Lake.

The RCMP responded with heavy police presence around 7:30 a.m. and redirected hikers away from trails while they searched for the pair.

Officers located the suspects at 8 a.m. and during the arrest, said they found the handgun in the man’s waistband.

Officers inspecting the weapon determined it was fake.

They said it was not the first time RCMP have been called to reports of a gun that was later determined to be a replica.

West Shore RCMP is reminding the public that anyone handling a firearm, real or otherwise, in a manner that presents a threat to public safety, may be arrested and could be the subject of a criminal investigation.

“Thetis Lake Regional Park is a huge area with lots of foot traffic and multiple off shooting trails. Our officers had a starting point of where the suspects were last seen but we needed to make sure the exits were covered,” said West Shore RCMP spokesperson Constable Nancy Saggar.

“This required the coordination of numerous police officers at multiple places in and out of the park.”

The two suspects are scheduled to appear in court Oct. 2 for proposed charges of possession of a weapon for a dangerous purpose and mischief.

They are being released with conditions until their court date.