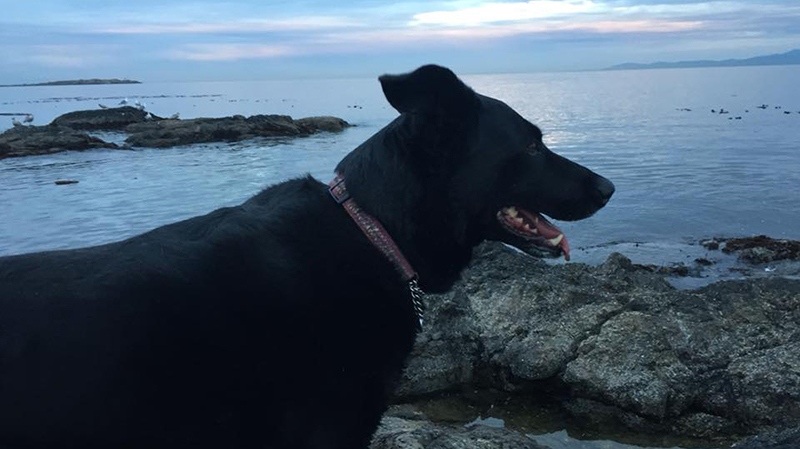 In a Facebook post, Anne Tanner said her shepherd-lab cross MJ was attacked by otters while going for a swim at Clover Point on Tuesday. June 12, 2018. (Facebook)

A Victoria woman says her dog was brutally attacked by otters who tried to drown it off Clover Point, and is now sharing the cautionary tale with other pet owners.

In a Facebook post, Anne Tanner said she took her 90-pound shepherd lab "MJ" for a swim at Clover Point on Tuesday at around 7:30 p.m.

"I found a stray chair I sat in on the point and was reading my book while throwing sticks for the dogs to swim after," she wrote. "All of a sudden I heard people scream and I turned around to see two giant sea otters attacking our shepherd lab about 25 ft or so off the point where I was sitting."

Tanner said one of the otters jumped a few feet out of the water to pounce on the dog, while another otter locked onto her leg to try to drag her underwater.

"All you could see was our dog's head try to stay above water while she yelped horrible dog cries," said Tanner.

A married couple who were close to the dog when the otters attacked screamed at the animals and threw driftwood at them, she said.

Thanks to the distractions, the dog put up a fight and freed herself.

According to Tanner she was "yelping, shaking and limping pretty bad."

She called the incident a "very scary thing to watch happen so fast," and said in the aftermath of the attack, the dog is going to be okay.

She said she's sharing the story to warn other pet owners that mammoth sea otters are in the waters off Clover Point hunting for prey.

"If you smell an extra pungent fishy smell (which I smelled but didn’t think anything if it), put your animals on a leash, as that’s a good sign Sea Otters are in the area," she said.