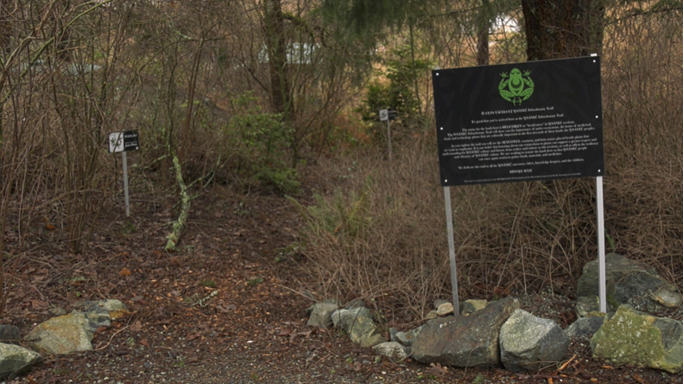 The entrance to the W̱SÁNEĆ Ethnobotany Trail at the Horticulture Centre of the Pacific in Saanich is pictured: (CTV news)

SAANICH -- Meandering through a forested corner of the Horticulture Centre of the Pacific in Saanich, a trail leads to a Garry oak meadow that is home to an ecosystem that is culturally significant to W̱SÁNEĆ peoples.

Walking along the W̱SÁNEĆ Ethnobotany Trail, visitors can learn about plants that are native to the southern part of Vancouver Island. Each plant marked with an identification tag has either medicinal, ecological or cultural significance to local Indigenous peoples.

“Culturally, this garden is important because these plants have co-evolved with W̱SÁNEĆ people and the land really informs us about who we are,” said W̱SÁNEĆ artist and environmental restorationist Sarah Jim. “It’s informed our language, our art and our world view, so these plants are really a part of who we are.”

The trail was developed through a partnership with the Horticulture Centre of the Pacific and local First Nations. The team was guided by the expertise of Elder Earl Claxton Jr.

Jim says the W̱SÁNEĆ people see the plants as kin. She sees the trail and the meadow garden as a way to reconnect with family.

“This garden is important so people can understand that these plants belong here and are not just weeds,” said Jim. “They are beautiful, and they have purpose and ecological importance.”

As an artist and member of the W̱SÁNEĆ Nation from Tseycum Village on the northern tip of the Saanich peninsula, Jim was inspired to create drawings of each plant for information markers. She incorporated Coast Salish design elements for each of the plant tag illustrations. In addition to the drawings, the plants are identified by their English and Latin names and they are also identified in SENĆOŦEN, the language of the W̱SÁNEĆ peoples.

“Up until this point I’ve been working on the land and learning about the plants and the language and being more involved in the community,” said Jim. “This was a culmination of all of that and I think from this point on it's going to become more native plant projects and restoration and place-based art making.”

The trail was first opened in 2009 but was closed in 2012 due to nearby construction. In the past few years, work has been done to restore the trail and meadow garden, which is now almost complete.

Jim says people who explore the trail will be surprised by the diversity of the plants and their beauty. She says if people take the time to pause in the environment, they will get insight into the importance of the Garry oak ecosystem by the variety of pollinators that visit the garden.

“I think people will be surprised by the amount of life we have here, and has been here for a long time,” she said.

To explore the W̱SÁNEĆ Ethnobotany Trail, visit the Horticulture Centre of the Pacific website.