The activists dumped approximately four garbage bags of horse manure outside the premier's office in Langford, B.C. at 9 a.m.

At least one of the demonstrators also picked up some of the dung and hurled it at the sign above Horgan's office.

The group Save Old Growth claimed responsibility for the action but the activists left the scene when Mounties arrived shortly after 9 a.m.

Within minutes, local residents had arrived and started shovelling the manure away.

"I live down the street and I'll be putting it right in the garden," neighbour Mark Peterson told CTV News.

Sophia Papp, of Save Old Growth, told CTV News the organization left the manure as a symbol of what it thinks of the Horgan government's priorities when it comes to old-growth logging.

The NDP government has announced deferrals of logging on more than a million hectares of old-growth forest in recent months, but has stopped short of the total ban on logging of old-growth that activists have been demanding.

"They’re still logging old growth," Papp said. "This notion that they’ve deferred areas, well those deferrals are not permanent and actually they’re not deferring areas that they would have logged otherwise.”

Papp said Wednesday's stunt was a precursor to further blockades on highways around the province in the name of stopping old-growth logging. 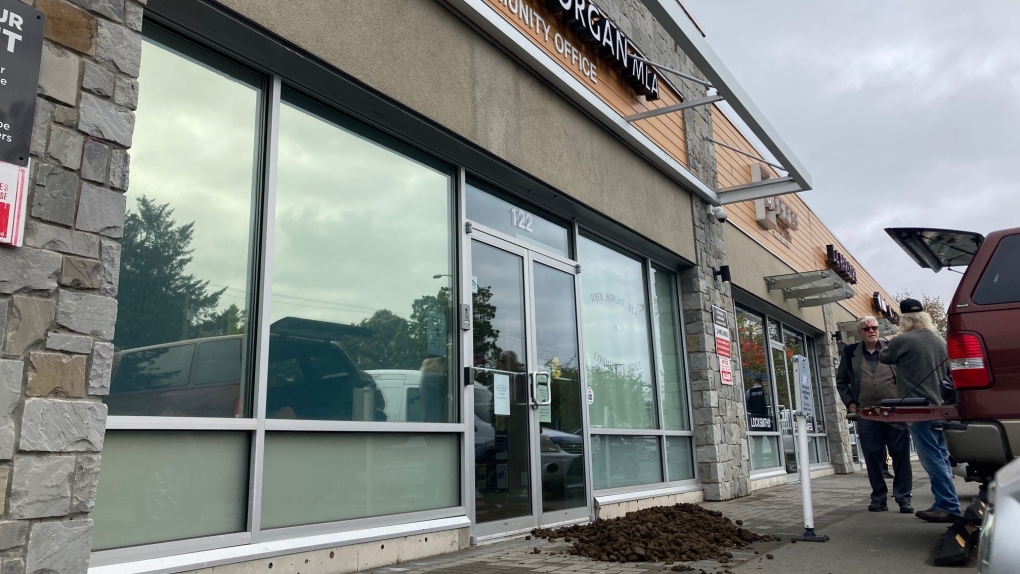 The group Save Old Growth claimed responsibility for the action but the activists left the scene when Mounties arrived shortly after 9 a.m. (CTV News)

Dozens of people have been arrested since January for blocking roadways around B.C., in some cases super-gluing themselves to the highway.

"As of June 13, blockades will start up again," Papp said. "We’re asking [activists] to take two weeks off work as it’s going to be full-time occupations and blockades."

West Shore RCMP say they're investigating the incident at Horgan's office as a case of mischief.

Police say they're looking for five people thought to be involved, based on surveillance video taken at the building.

Anyone who recognizes the individuals in the photographs below, or who saw vehicles that seemed to be involved in the protest, is asked to contact West Shore RCMP at 250-474-2264. 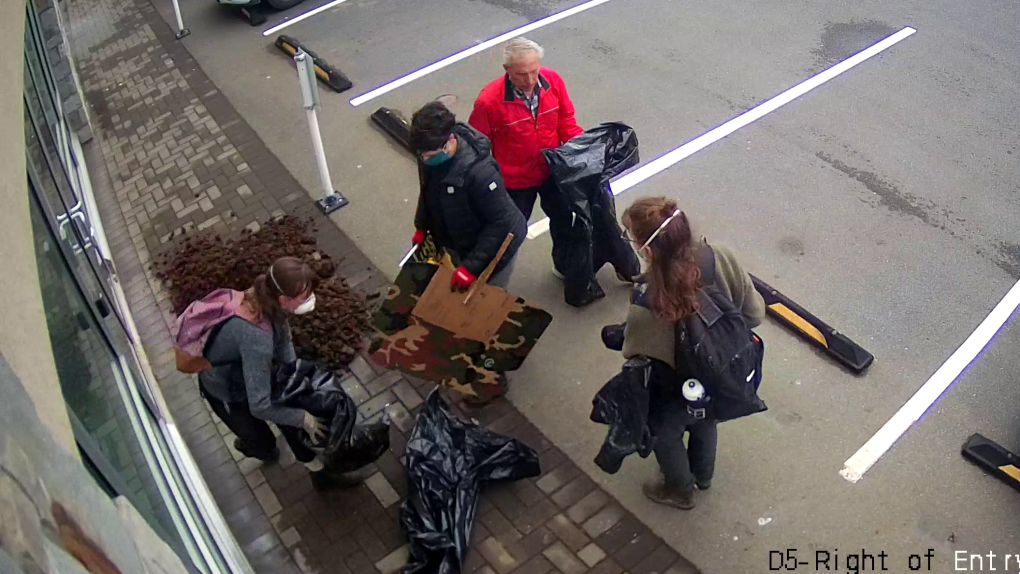 CTV News reached out to Horgan's office for a response to the manure protest, and received a statement from Minister of Public Safety Mike Farnworth that read, in part:

“Peaceful protest is part of our democratic society. On the other hand, vandalizing property, preventing people from accessing services, and harassing local businesses is deplorable behaviour."

Farnworth went on to express "heartfelt appreciation" to the local residents and business owners who quickly cleaned up the manure.

"For those who employ these reprehensible tactics, I can assure you that you achieve nothing but increasing the frustration of the local community," the minister said.