Victoria police have arrested a group of activists who were blocking the southbound lanes of the Trans-Canada Highway for several hours as part of a province-wide old-growth logging protest on Monday.

The blockade halted traffic heading into the city near the intersection with Burnside Road East.

Victoria police were on scene before 8 a.m. to negotiate an end to the blockade as traffic was diverted at Finlayson Street.

"Officers have advised those blocking the highway that they will be arrested for mischief if they do not end the blockade," Victoria police said in a statement on Twitter before the arrests began.

Approximately seven protesters were arrested peacefully, including two who were laying on the roadway and had to be carried into a waiting police van.

The road was fully reopened to traffic before noon. 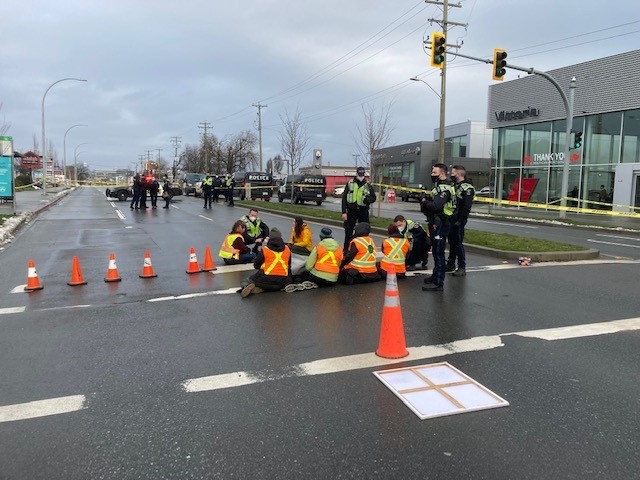 The group, calling itself "Save Old Growth," said in a statement Sunday that it plans to block the Trans-Canada Highway in several places across B.C. on Monday.

The group said it would begin by blocking Highway 1 off-ramps in Vancouver, Victoria, Nanaimo and in the Interior near Revelstoke, and would continue blocking the route "multiple times per week."

"The frequency and scale of actions will escalate until all old-growth logging is stopped," said Save Old Growth in its release.

The group calls itself "a new civil resistance movement that will see ordinary people risking everything to protect the lives of their families from the effects of the corporate destruction of our world."

Victoria police say those arrested Monday were transported to police cells and later released pending court appearances. Six of the suspects are adults and one is 17 years old, according to police.