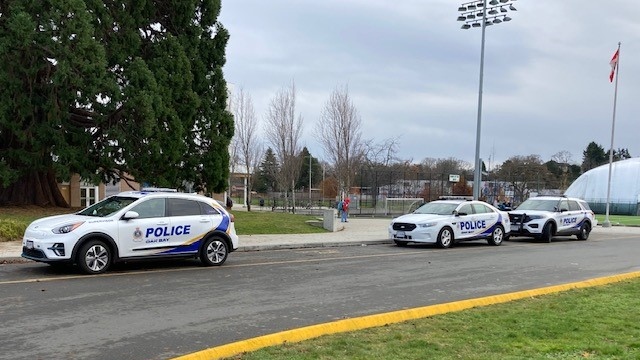 Police respond to Oak Bay High School near Victoria after a threat was made against the school on Wednesday, Nov. 30, 2022. (CTV News)

Students and staff at a Victoria-area high school were sent home early Wednesday after someone threatened a shooting at the school.

The Oak Bay Police Department says it was contacted by Oak Bay High School administrators around 10:30 a.m. after the threat was found written on a stall door in a girls' washroom.

The message "indicated that someone was going to bring a gun to the school and that there would be a shooting" at 2 p.m., the department said in a release Wednesday afternoon.

The Greater Victoria School District says police advised school administrators to send students and staff home due to the threat.

"Out of an abundance of caution, Oak Bay High will be dismissing students at 1 p.m. today," the school district said in a statement. "All classes, practices and scheduled events are cancelled for the rest of the day."

Multiple students confirmed to CTV News the message found in the bathroom said there would be a shooting at the school at 2 p.m. All of the students said they did not believe the threat was credible.

Police remained at the school Wednesday to conduct an investigation into the threat.

"At this point in time, there is no evidence of anyone having a firearm at the school," Oak Bay police Chief Mark Fisher said in the release.

Classes at Oak Bay High are expected to resume as usual Thursday.