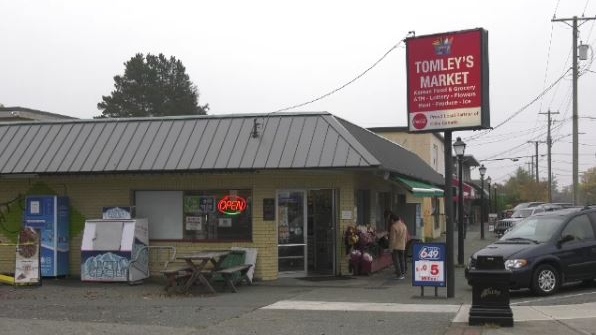 While police say they do not encourage people engaging with armed suspects, they note that the store owner's actions were vital in the Halloween night arrest: (CTV News)

The incident occurred around 7:45 p.m. at Tomley’s Market on Foul Bay Road. Police say a man entered the grocery store while wearing a facing covering before brandishing a knife and demanding money from staff at the business.

The business owner fled the store but remained at the entrance of the building. The man then allegedly grabbed cash from behind the counter before trying to flee the scene.

The store owner, however, remained at the front door and held it shut, preventing the man from making an escape.

Eventually, the suspect kicked open the door and pointed the knife at the store owner, cutting one of the victim’s fingers, before punching him.

Despite being injured, the store owner continued to wrestle with the suspect who was trying to escape on a bicycle until police arrived.

Oak Bay police then took the man into custody and retrieved the knife, as well as the cash that was stolen during the robbery.

“We strongly discourage people from fighting with armed individuals over money as this could’ve had a much more worse outcome,” said Oak Bay Police Chief Ray Bernoties. “However, there is no doubt that the actions of this store owner were critical to ensuring the suspect’s arrest.”

“I’m pleased he is doing well and I’m sure his customers will be relieved as he is a highly respected member of our community,” he said.

The suspect is facing several charges including armed robbery. He has appeared before a justice of the peace and has since been release on conditions, say police.