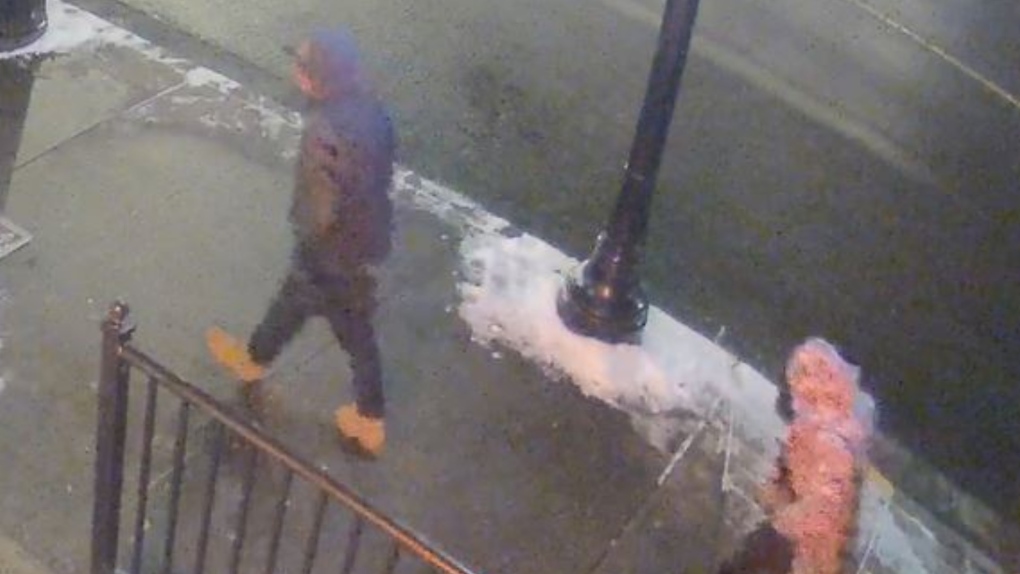 Police released surveillance photos of the two suspects, but their faces cannot be seen in the images. (Nanaimo RCMP)

VANCOUVER -- Police on Vancouver Island are looking for help identifying a man and a woman suspected of stealing a 27-year-old man's wallet. They're also warning the public not to do what he did in an apparent attempt to get his wallet back.

The theft in question happened on Jan. 12, according to a release from Nanaimo RCMP, but the victim did not call the detachment right away.

Instead, he monitored his credit card for fraudulent transactions. According to police, he received notifications that the card had been used at a Co-op store on Victoria Crescent on Jan. 13 and at a 7-11 in Nanaimo's Harewood neighbourhood the following day.

After receiving that second notification, the victim drove to the 7-11 with a baseball bat and confronted several people sitting in a vehicle in the parking lot, police said.

When the vehicle fled, the victim pursued it in his own vehicle, and informed police that the two suspects had been dropped off at a location not far from the 7-11.

Officers searched the area with a police dog and found several pieces of clothing discarded by the suspects, but did not find the suspects themselves, nor their vehicles.

As of Friday, the stolen wallet and credit card had not been recovered, police said.

"We do not recommend any of the actions taken by the victim," said Nanaimo RCMP spokesperson Const. Gary O'Brien in the release.

"Confronting individuals is not advisable, and showing up with a baseball bat is never a good idea," O'Brien said.

Instead, he recommended victims of wallet theft contact their credit card companies to cancel the cards and then call police to report the theft.

Police released surveillance photos of the two suspects, but their faces cannot be seen in the images. They said the man is white and was wearing a blue jacket with brown sleeves at the time the photos were taken outside the Co-op around 11:35 p.m. on Jan. 13.

Police said the woman is also white, and can be seen in the photos wearing a white white winter jacket with black accents and black pants.

Anyone with information on the identities of the two suspects is asked to call the Nanaimo RCMP non-emergency line at 250-754-2345.